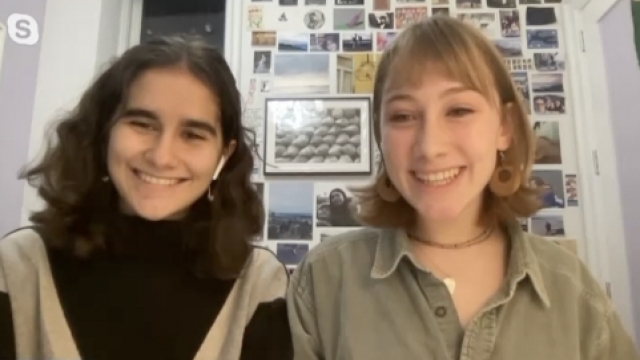 Teens for Press Freedom is founded for and by young adults. It's a national organization co-founded by Charlotte Hampton and Isabel Tribe, who are dedicated to defending journalists and promoting factual literacy among their peers.

NEWSY'S NATALIE ALLEN: What inspired you to start this organization?

CHARLOTTE HAMPTON: Isabel and I started Teens for Press Freedom in the aftermath of attacks on reporters at Black Lives Matter protests over the summer of 2020. We were witnessing reporters — like CNN correspondent Omar Jimenez — being put in handcuffs on live television and that scared us. It said young people can't take our First Amendment rights for granted and we have to fight for them actively.

ISABEL TRIBE: We were raised alongside Apple and Instagram, so while our parents are turning to the news, television shows and libraries for information, we're opening Twitter and TikTok. Because we're spending hours immersed in constantly updated information, it becomes really hard for us to separate fact and fiction online and it becomes easier for us to be immersed in these echo chambers where we are surrounded by opinions that only tell us what we want to hear and show us what we want to see. It makes it really easy to assume these absolutist, dogmatic perspectives.

HAMPTON: Yes. I mean, it's not just because we're the generation that's spending the most time on social media — far more than our parents. It's because our political identities are being formed online. Older generations were reading print media and watching Walter Cronkite. From those more credible sources, they've been Democrats or Republicans for many voting cycles and have gotten a feel for the political landscape based on truthful narrative. But young people are being radicalized because we're being divided into these curated echo chambers that are based on confirmation bias.

ALLEN: It's so important, Isabel, because your generation is going to be running things one day. You're moving on in life and we all know that the key to our democracy is information. What kind of response are you getting from your peers? Are they paying attention?

TRIBE: Our peers are really receptive and it's so encouraging. Our peers and other teens recognize that this is a problem. They recognize that they have work to do. They have to change their media habits and it is all imperative for the health of our democracy. After our peers attend our workshops, they'll come to us and say 'Hey, I'm fact-checking what I'm reposting on Instagram now. I'm continuing these conversations at the dinner table.' That is incredibly fulfilling for us.

ALLEN: As you mention Walter Cronkite, I grew up with the newspaper being tossed on the driveway. That's what we had and I can't imagine being a young person and being bombarded with everything that's out there. We really appreciate what you're doing and thank you for talking with us.