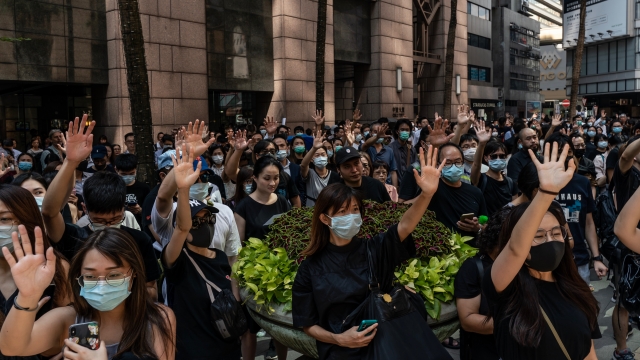 SMS
Teenage Protester Shot In Hong Kong Demonstrations
By LeeAnne Lowry
By LeeAnne Lowry
October 2, 2019
It's the first time a demonstrator has been shot since the protests began in June.
SHOW TRANSCRIPT

Tuesday marked seven decades of Communist Party rule in China. As the mainland celebrated, Hong Kong saw one of its most violent days.

Police and demonstrators faced off in multiple districts, with protesters reportedly throwing bricks and Molotov cocktails at police, who fired tear gas in return.

A teenage protester was shot by a police officer during the demonstrations on Tuesday. We want to warn you, some of the visuals in this video are graphic. The BBC said it was one of six live rounds fired by police, and the first time a demonstrator has been shot since the protests began in June. A spokesperson for Hong Kong police said the protester was shot in the shoulder.

In a video that appears to show the shooting, the student is part of a group of protesters who attack the officer with metal pipes, before the teen is shot at point-blank range. Hong Kong's Deputy Commissioner of Police defended the use of force in that situation.

Deputy Commissioner Chris Tang told reporters: "The only objective is to shoot to stop the life threat. And it is in line with our guideline and international standards, and that the officer shoot at center mass. The distance between our officer and our assailant is never a concern, it's exactly because our assailant was so close to our officer that a life threat was really imminent. The use of force is undoubtedly lawful and reasonable."

The protester — who is in critical but stable condition — was arrested and charged with assaulting an officer, and could face riot charges.