Teen With Autism Exceeds Expectations, Gets Accepted To College 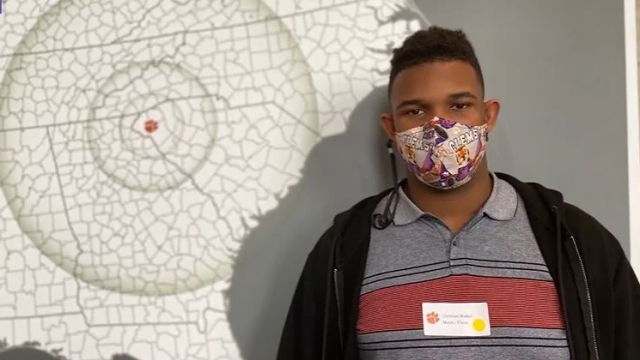 Christian has already accomplished so much and later this year, he'll head off to college—to pursue his love of music.

"I currently serve now as the drum major for my school's marching band," says 18-year-old Christian Walker, who is already doing big things.

"I am a primary pianist in the Georgia State University jazz orchestra. I've been in jazz columns ever since, but this year I'm in the big band. Getting there wasn't easy," says Walker.

At school, Christian was nominated to the homecoming court. He's a senior and will soon be off to the next adventure.

In a video shared to Facebook by his mom, Terra Walker, surrounded by family and friends, Christian learned he has been accepted to Clemson University.

"He was actually away, he was out of town and then as soon as he got back, we just all opened it together, saw it and went crazy! It was the one we were waiting for," said Terra.

Christian has decided on a performing arts major with a specialty in piano, he'll join Clemson's Spectrum Program, specifically designed for students diagnosed with autism. When Christian was 2-years-old, Terra says she began noticing things like her son's delayed speech, and says the diagnosis felt overwhelming.

"Doctors said like he would never go to a regular school, that I should be prepared to institutionalize him one day," said Terra.

From there, Terra found a team of professionals, doing no matter what it took, to help her son succeed. Flash forward 16 years, Christian is flourishing and he's even mentoring others.

"I am mentoring a freshman in high school who also has autism like myself. He also dreams to be drum major for his marching band, so I am giving him some useful advice along the way," said Walker.

Now, Terra is posting videos on the Facebook page "Beauty in Autism."

A page she created to share stories of inspiration, hope, and encouragement to support other families. Letting other parents know they aren't alone, and inspiring others with autism to chase and achieve their dreams, just like Christian.

"The question I get most is, "What do I do? I have a 2-year-old, a 16-year-old, a 20-year-old, what should I do? What do you recommend? What I would just offer is don't give up. Believe that anything is possible."

Christian says he didn't only get accepted to Clemson; he was also accepted to four other colleges. Clemson is certainly lucky he chose to be a Tiger.