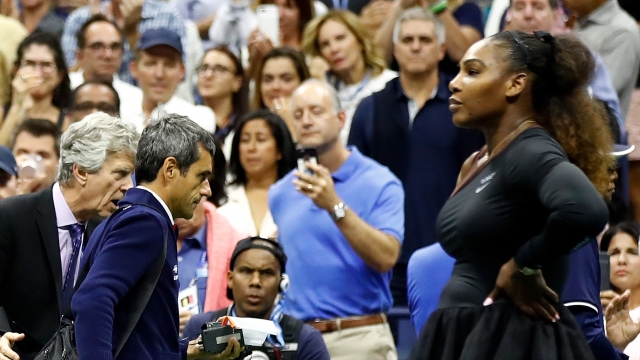 SMS
Teen Swimmer's 'Uniform Violation' Is A Symptom Of Racism In Sports
By Adam Elrashidi
By Adam Elrashidi
September 12, 2019
One swim coach has questioned why the "curvier" girl was the only athlete penalized for wearing her school's swim uniform.
SHOW TRANSCRIPT

When is an athletic uniform considered "inappropriate?" Well, that may depend on who's wearing it.

An Alaska school activities board recently reversed its decision to disqualify a student athlete over what a referee called a "uniform violation." District officials appealed the decision on behalf of the 17-year-old swimmer, saying she was targeted for how a "school-issued uniform happened to fit the shape of her body."

Some parents had reportedly commented on the girl's uniform and shared photos with others to demonstrate the "inappropriate swimwear." Another swimming coach asked why that swimmer, whom she said had a "darker complexion" and a "curvier, fuller-figured body" than her teammates, was the only athlete penalized.

The answer is likely rooted in racism, especially in traditionally white, middle-class sports like swimming, tennis and golf. Sports have long served as a measuring stick for racial progress, especially in the U.S. But nonwhite athletes routinely endure criticism for their dress and behavior on the field in ways their white peers do not.

Black athletes in particular are sometimes characterized by sports writers and commentators in ways that compares their bodies and performances to animals. And that doesn't even take into account the racial slurs hurled at them by fans.

Tennis champion Serena Williams has famously been the subject of both racist and sexist caricatures featuring stereotypes about African-Americans.

Ben Carrington, an associate professor of sociology and journalism at the University of Southern California, told Newsy "It's a way to sanction certain black expressive behavior."

Carrington told Newsy that the expectation to maintain the informal norms of play is a remnant of Victorian-era rules governing "good sport." These norms, he said, are implicitly white, and black athletes have been disproportionately punished for challenging them.

"It goes back to [boxer] Jack Johnson, the first black heavyweight champion," said Carrington. "He pushed the boundaries of how to behave, he spoke out — so when he was finally beaten, it cast a shadow that made it hard for others to be the 'anti-hero'."

Carrington said, "There's a great quote from W.E.B. DuBois highlighting the hypocrisy for how the media treated Johnson, who wasn't the first athlete to gamble or have affairs, but that he was treated the way he was 'because of his unforgivable blackness' — and it's still something that marks black athletes."