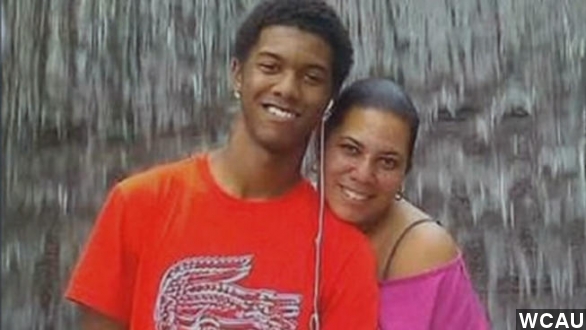 By Briana Koeneman
June 12, 2014
A 19-year-old man saved his mother's life by jumping in front of her after a neighbor broke into her apartment and opened fire, according to police.
SHOW TRANSCRIPT

A Philadelphia woman is alive thanks to her brave teenage son. Police say he jumped in front of her as a neighbor tried to shoot her.

"Patricia Buckworth and her son Roderick were in their ground-floor apartment. Police say their neighbor Jason Brunson barged in and fired shots. Exactly why is still unclear." ​(Via WCAU)

According to WWBT, police say 41-year-old Brunson shot 19-year-old Roderick twice as the teen shielded his mother from the gunfire. They say Brunson managed to shoot Patricia once before ceasing fire.

Officials say when Brunson stopped shooting, Roderick and Patricia managed to escape the apartment and flagged down a UPS driver, who immediately called police. But as officers made their way to the scene, investigators say Brunson shot and killed himself.

A family friend told WCAU: "God had his hands in this for sure. [Roderick] saved his mother’s life. He’s a hero. There's nothing like the love of a mother and son. It's unbelievable."

Luckily, both mother and son avoided any serious injuries, and they are both in stable condition at a local hospital. Officials say one bullet was just a centimeter away from hitting one of Roderick's major arteries.

And now, as the teen recovers from his wounds, several family friends told The News Journal he's being hailed as a local hero. The outlet reports Roderick started singing at community events to spread the message of respect and nonviolence after his cousin was murdered in 2002.

"In knowing Roderick, I'm sure he'll use this situation to disseminate other information related to violence in the community and how senseless it can be." (Via The News Journal)

Patricia told reporters she had never interacted with Brunson before the shooting, and she has no idea why he would want to hurt her or her son.