Teen's Phone Ignites Under Her Pillow; How Real Is The Risk? 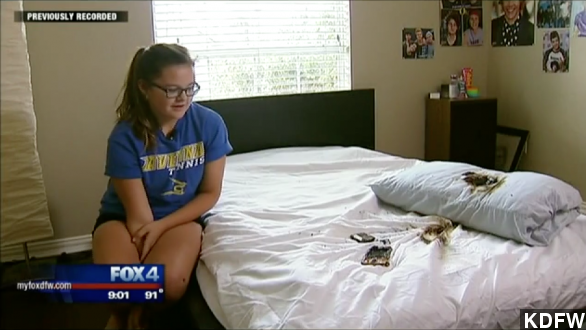 SMS
Teen's Phone Ignites Under Her Pillow; How Real Is The Risk?

By Lauren Zima
July 28, 2014
A Texas teen's Samsung phone apparently ignited while she slept, but what was the real problem here?
SHOW TRANSCRIPT

Plenty of people tend to fall asleep with their phones in their beds at night, but one 13-year-old's tale is cautionary, to say the least. KDFW has the story of the Texas teen.

"The plastic, the glass, you can't even really tell it was a phone."

"This is what's left of Ariel's phone. She says it slipped under her pillow as she fell asleep. The smell of something burning woke her in the night."

Definitely a scary situation that could have been much worse. Ariel Tolfree had a Samsung Galaxy S4. Her dad told KDFW he thinks the phone overheated and the battery swelled while she slept.

Now, the battery was not original to the phone; it was a replacement. And Samsung's manual does contain a warning:

"Use of a non-Samsung-approved battery or charger may present a risk of fire, explosion, leakage, or other hazard."

A piece on phone safety from Digital Trends emphasizes that third-party batteries are dangerous — they aren't necessarily compatible with your phone.

But even with the approved company battery, phones can be dangerous.

Samsung's not the only one — there are headlines about iPhones igniting, too. (Via Apple Insider)

And sleeping with phones poses a very real potential danger —  Apple's manual even says, "Don’t sleep or place a device or power adapter under a blanket, pillow, or your body when it's plugged into a power source."

Of course, just like we often sleep with our phones, we often don't read user manuals. Be safe with your phones, but Digital Trends also reminds us:

"You're far more likely to be struck by lightning, give birth to quadruplets, or be an Olympic medal winner than get hurt from your phone."