Teen Gets Suspended After Asking Miss America To Prom 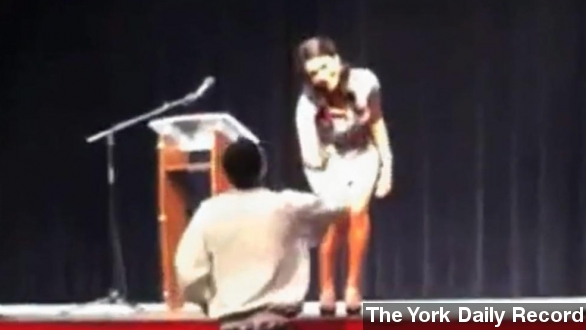 SMS
Teen Gets Suspended After Asking Miss America To Prom

By Jasmine Bailey
April 19, 2014
School officials at a York, Penn. high school say Patrick Farves disobeyed a direct request from administrators when he made the "promposal."
SHOW TRANSCRIPT

If you're going to get suspended from school — why not let it be because of one of the gutsiest promposals ever?

... after he asked Miss America to prom, gave her a flower and busted a move while she was at the school giving a speech. "I was nervous but when you're ready, you're ready." (Via WHP-TV)

Hey, we get it — sometimes you just can't resist but neither could the school officials, who promptly escorted Mr. Farves out of the room.

Now, don't get it confused – the teen didn't get in trouble just for asking Nina Davuluri to prom — he got in trouble for disobeying a direct request from administrators. (Via WPMT)

"Farves had announced his plan in class and once the rumor spread he said an administrator pulled him aside and told him not to do it because it would be inappropriate."

The school district released this statement in response to the incident, "It is not our practice to discipline a student for asking someone - even Miss America -  to a school dance. However, it is our practice to set expectations for student behavior, to communicate those expectations and rules to students and families and to ensure those rules are followed within our schools." (Via Central York School District)

And Farves did admit he was in the wrong, saying he took attention away from Davuluri's message with the stunt. He told The York Daily Record he understands where school administrators are coming from.

"They did a lot of hard work and probably spent a lot of time trying to get Miss America to our school, so I completly understand why they were frustrated with that."

But the real question — is Farves taking Miss America to prom? Well, we will admit chances don't look bright. (Via Flickr / Andy Jones)

Since the promposal Thursday, the 24-year-old has been completely silent on the topic.

But we gotta say, at least when Kate Upton was asked to prom last spring, "It would mean the world to me if you came, and I'd do anything to get you here."  (YouTube / Talia Myers)

She at least showed a little love and replied — ultimately saying no due to her busy schedule. (Via Twitter / @KateUpton)

Maybe Miss America's just not that into bad boys.