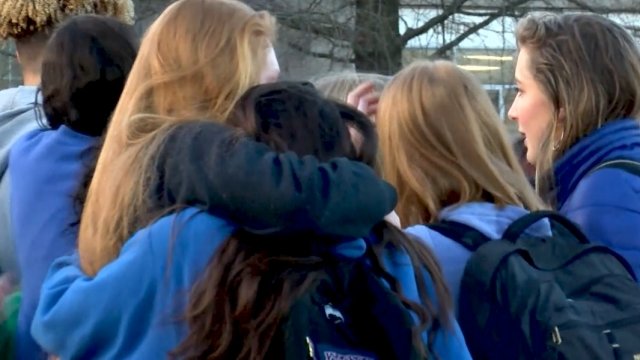 The shooter accused of killing two students at a Kentucky high school went to court Thursday.

The 15-year-old accused of killing two students and injuring at least 14 other people at a Kentucky high school had his first court appearance Thursday.

Officials haven't identified the gunman. Because it's currently a juvenile case, the proceeding was closed — so only court personnel, victims, their parents and the suspect's parents were allowed in.

He's charged with two counts of murder and 12 counts of first-degree assault. Prosecutors say they'll push to move the case out of the juvenile court system and added that the charges could change. A grand jury is expected to meet next month.

The shooter walked into Marshall County High School on Tuesday morning shortly before classes started. Officials say a total of 18 people were hurt.

What's Changed In The 5 Years Since The Sandy Hook Shooting?

Schools themselves might have taken a more active role than Congress in preventing future massacres.

15-year-old students Bailey Holt and Preston Cope died after the shooting Tuesday. Holt died at the school. Cope died at a hospital.

Holt's mom said her daughter called her during the shooting, but didn't say anything. She said Bailey wanted to be a nurse.

"She was beautiful, so sweet, funny," said Johanna Davis, a friend of Holt's.