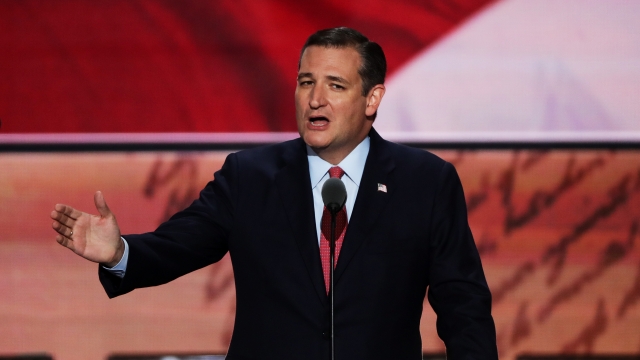 SMS
Ted Cruz Wants America To 'Take Off The Blinders' To Fight Terrorism
By Eugene Daniels
By Eugene Daniels
September 19, 2016
Cruz also called for an end to the "flow of refugees from hotbeds of terrorism in the Middle East."
SHOW TRANSCRIPT

Texas Sen. Ted Cruz says it's time for Americans to "take off the blinders" when it comes to fighting terrorism. The statement comes after attacks in New York and New Jersey and an unrelated stabbing attack in Minnesota.

Cruz goes on to say we should stop the "flow of refugees from hotbeds of terrorism in the Middle East" and calls on Congress to stop Americans who travel abroad for Jihadi training from coming back to the US. He also hits the president's policy to fight terrorism.

Cruz calls for support for law enforcement: "We must start by fully supporting our law enforcement community, from the heroic off-duty officer Jason Falconer, who neutralized the terrorist in the St. Cloud mall, saving many lives, to the FBI officers in New York who have worked swiftly to identify and apprehend the likely mastermind of the weekend bombings."

Nothing in this statement is surprising. Cruz has been vocal about his disappointment in President Obama since hitting the Senate. Last year, Cruz sponsored a bill to stop refugees from countries like Syria and Iraq from being resettled in the United States. His statement is likely to hit a chord after the attacks.

It's been reported the suspect in the Minnesota stabbings was a refugee; his father, a Somalian, says his son came to the US 15 years ago.

But the suspect in the New York and New Jersey bombings, a naturalized US citizen, wasn't a refugee. According to law enforcement sources, however, he had traveled to Afghanistan in the past. He was questioned after each visit but was never on the government's radar.