Ted Cruz 101: Where He Stands On The Issues 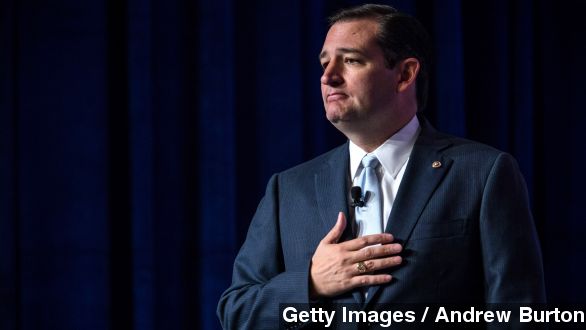 During his campaign announcement Monday, Ted Cruz asked us to do a lot of imagining:

But if you're still having trouble imagining what a Ted Cruz presidency would look like, here's a look at what he's previously said are his top three policy priorities.

"No. 1: Repeal every blasted word of Obamacare," Cruz said at the Conservative Political Action Conference in February 2015. (Video via Office of Sen. Ted Cruz)

It was no coincidence Cruz launched his campaign on the health care law's fifth anniversary at — of all places — a school that once filed a suit against the law.

This is, after all, the same man who delivered a 21-hour anti-Obamacare talkathon on the Senate floor. "Do you like green eggs and ham?" Cruz said.

Cruz — like his other potential GOP rivals — wants to scrap law, something congressional Republicans have tried doing repeatedly over the past four years.

"No. 2: Abolish the IRS," Cruz said at the Conservative Political Action Conference in February 2015. (Video via Office of Sen. Ted Cruz)

The Texas senator has regularly called for replacing the current tax code with a flat tax system where every taxpayer pays the same percentage of their income.

Critics point out, under that approach, it's possible lower- and middle-income earners would pay a higher percentage than they do under the current structure.

"It ought to be a simple one-page postcard," Cruz told Fox News.

His argument is, under a simplified tax code, the IRS wouldn't be needed.

Cruz hasn't elaborating on who — if not the IRS — would collect taxes, short of his rep telling The Dallas Morning News, Cruz envisions a "small department that would enforce the tax code."

"No 3: Stop the out-of-control regulators at the EPA and the alphabet soup of Washington," Cruz said at the Conservative Political Action Conference. (Video via Office of Sen. Ted Cruz)

The Texas lawmaker wants to stop the Environmental Protection Agency from regulating greenhouse gasses, he wants to expand oil and gas drilling, and he wants to he wants fewer restrictions on fracking.

"The problem with climate change is there's never been a day in the history of the world in which the climate is not changing," Cruz told CNN.

Cruz, who currently chairs the Senate committee that oversees NASA, now acknowledges climate change exists but says it is not caused by human activity. (Video via Office of Sen. Ted Cruz)