Internet Companies Are Teaming Up To Block White Nationalists 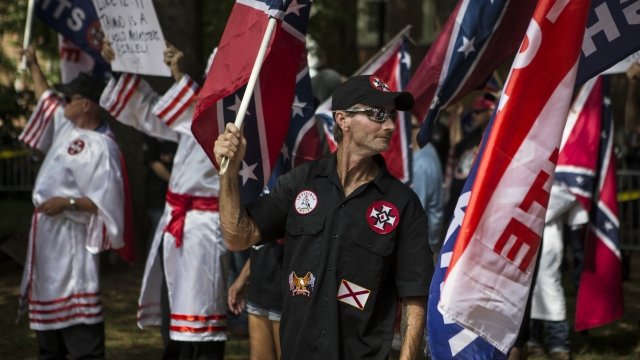 After the Charlottesville rally, major online companies like Google are barring white nationalist groups and figures from using their platforms.

After the violent protests in Charlottesville, Virginia, over a Confederate monument, internet companies are making it difficult for white supremacist groups to organize online.

Neo-Nazi website the Daily Stormer was booted from web host GoDaddy after the rally. GoDaddy tweeted the site violated its terms of service.

The Daily Stormer then tried to move to Google and then a Russian domain, but both hosts rejected the site.

Twitter and LinkedIn also canceled Daily Stormer-related accounts, and YouTube has cracked down on accounts associated with alt-right figures.

The same day Trump posted ticket information for a rally in Phoenix, Mayor Greg Stanton said in a statement he hopes the president "delays his visit."

White supremacists aren't being allowed to express themselves through song, either. Spotify is purging white supremacist music from its archives. And Pandora said it's making sure there's nothing like that on its service.

This was a trend before the "Unite the Right" rally even started. Airbnb deleted accounts of users it suspected were trying to book rooms in Charlottesville before the event.

Crowd-funding sites like Patreon and GoFundMe blocked the accounts of alt-right figures and groups, forcing some to use a knockoff called Hatreon.