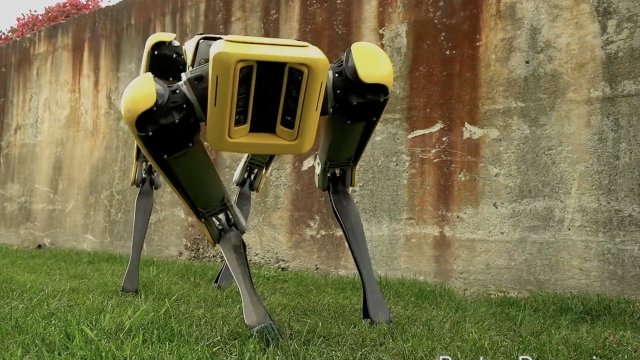 SpotMini appeared in a short teaser video Monday, with a few notable changes from its predecessor that debuted last year.

It has a sleeker design with plastic panels that hide clunky nuts and bolts below the surface. It's also more agile than the previous SpotMini — probably making it less likely to be bested by banana peels.

The new design, with its bright yellow coloring and lack of a snake-like neck, could cut down on the robot's creepy factor. Although not everyone is put at ease by the new design.

The company's new owner, Softbank, has some experience in making robots cuter and more consumer-friendly.

It's behind the commercial robot Pepper.

In the past, Boston Dynamics has alluded that the all-electric SpotMini could be used for housework. But details about the new version are sparse.

The video just shows SpotMini trotting off screen as it displays the message, "Coming soon."