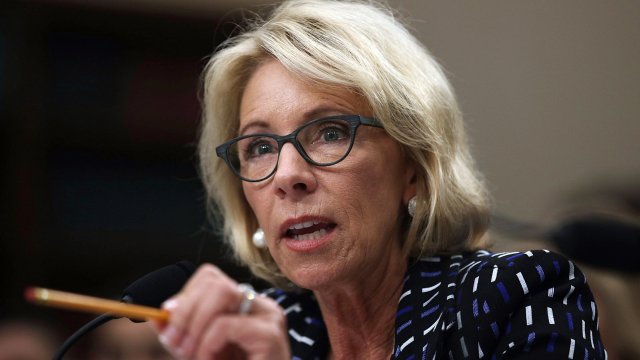 A teachers union is suing Education Secretary Betsy DeVos over what it calls "gross mismanagement" of the federal Public Service Loan Forgiveness program.

The American Federation of Teachers alleges the Department of Education "deliberately blocked access" to the program, which can forgive teachers' and other public servants' loans if they meet certain requirements.

According to the union, the department has improperly rejected applications and violated constitutional rights to due process.

The complaint names eight educators seeking loan forgiveness among the plaintiffs. The suit's also asking the Education Department to change the application process and put an appeals system in place.

The program, created under the George W. Bush administration, erases student loans for people who work full-time in certain public service jobs — as long as they've made on-time payments for 10 years.

But applicants have complained about the program's rules and qualifications. According to federal data, a majority of borrowers' applications have been rejected since the program was created in 2007. That means tens of thousands of people have been stuck with student loans that they anticipated would be forgiven.

DeVos has proposed ending the initiative, though critics have said that move would steer people away from certain jobs, like police officers, firefighters and public defenders.

Earlier this year, a group of Democratic senators introduced a bill aimed at broadening the program by streamlining the application process and tweaking the timeline for and percentage of loan forgiveness. Supporters of that concept say reworking the program would bring more people into public service work.