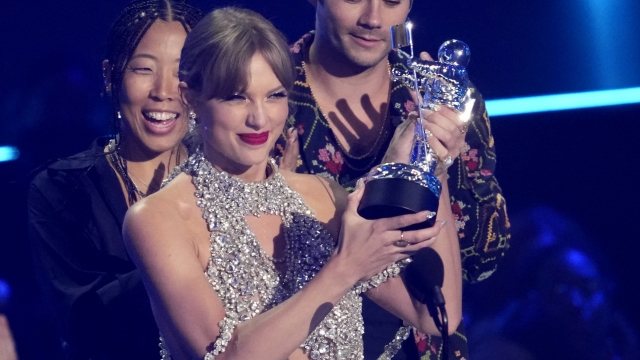 Taylor Swift took home the top prize at the 2022 MTV Video Music Awards on Sunday before she closed out the show with a surprisingly big announcement: Her new album.

"I thought it would be a fun moment to tell you that my new album comes out Oct. 21," said Swift after she won video of the year for her project "All Too Well: The Short Film" (10 minute version), which claimed best long form video and direction. "I will tell you more at midnight."

Swift said on social media that her upcoming 10th studio album would be called "Midnights," which she says will involve "stories of 13 sleepless nights scattered throughout my life." Her upcoming album comes after she released "Folklore" and "Evermore." Both projects came out five months apart two years ago. "Folklore" won album of the year at the 2021 Grammy Awards.

The pop star's reveal came at the end of her acceptance speech where she praised the other women in the category — which included Doja Cat and Olivia Rodrigo.

Swift spoke earlier about creating her first short film, giving thanks to several including actors Sadie Sink and Dylan O'Brien, who starred in the project.

"We put our entire hearts into this," Swift said.

Rapper Jack Harlow made his mark throughout the entire show. He kicked off the show with a performance inside a mock airplane walking down the aisle while performing his hit song "First Class," which samples Fergie's "Glamorous." The rapper was joined onstage by Fergie — who wore a sparkling silver dress with the red words "First Class" — while she sang her 2006 jam.

"Thank you to Fergie for coming out with me tonight and clearing this song," said Harlow after "First Class" won the award for song of the summer later in the show. "The beauty of this song is that people don't realize it's so hip-hop because of the sampling. To bring Fergie into the mix in this way means the world to me. It's truly full circle. 'Glamorous' was one of the most important songs of my childhood."

During the show, Johnny Depp made a surprise appearance as the Moon Man nearly three months after the verdict in his defamation trial with his former wife Amber Heard. The 59-year-old actor appeared to float from the ceiling while wearing the iconic astronaut outfit with his face digitally inserted into the helmet.

"And you know what? I needed the work," Depp told the audience at the Prudential Center in Newark, New Jersey.

Lizzo had Taylor Swift dancing out of her seat while she performed her new single "2 Be Loved (Am I Ready)." Lizzo won the video for good award for "About Damn Time."

"This one is for the champions," said Lil Nas X before Harlow thanked him for the collaboration on the chart-topping single.

Harlow, in addition to performing and winning awards, joined LL Cool J and Nicki Minaj as the show's hosts.

Minaj performed a medley of her career's biggest hits: "Roman's Revenge," "Chun-Li," "Moment 4 Life," "Beez in the Trap," "Anaconda" and "Super Bass." After her set, the rapper accepted the show's Michael Jackson Video Vanguard award, which MTV has said she's receiving for her artistry, barrier-breaking hip-hop and status as a global superstar.

During her acceptance speech, Minaj paid tribute to other music icons such as Jackson, Whitney Houston and Lil Wayne. She spoke about the importance of mental health.

"I wish people took mental health seriously, even when you think they have the perfect lives," said Minaj, who later won best hip-hop for her song "Do We Have a Problem?" featuring Lil Baby.

Harry Styles won album of the year for "Harry's House." He was unable to attend the awards due to his show at Madison Square Garden in New York.

Bad Bunny performed his hit "Titi Me Pregunto" from Yankee Stadium after he won artist of the year.

"I have been saying it and I always believed from the beginning that I could become great," he said. "That I could become one of the biggest stars in the world without having to change my culture, my language, my jargon. I am Benito Antonio Martínez from Puerto Rico to the whole world, thank you!"

Eminem and Snoop Dogg brought the metaverse to the VMAs as the duo performed "From the D 2 The LBC," which was featured on Eminem's greatest hits album "Curtain Call 2."

The Red Hot Chili Peppers took the stage as the recipients of the Global Icon award after being introduced by Cheech & Chong as their "favorite band of all time." The band — which consists of Anthony Kiedis, Flea, Chad Smith and John Frusciante — performed several songs including their classic "Can't Stop" from the group's 2002 album "By the Way" and their recent hit "Black Summer," which won best rock.

Flea made a speech about his love for human beings along with cockroaches, trees and dirt. Smith, the band's drummer, dedicated the award to Taylor Hawkins, the Foo Fighters drummer who died earlier this year.

"I dedicate this to Taylor and his family," he said. "I love them and I miss him every day."

Madonna, who is the most awarded artist in MTV history with 20 wins, became the only artist to receive a nomination in each of the VMAs' five decades. She earned her 69th nomination for her 14th studio album "Madame X."