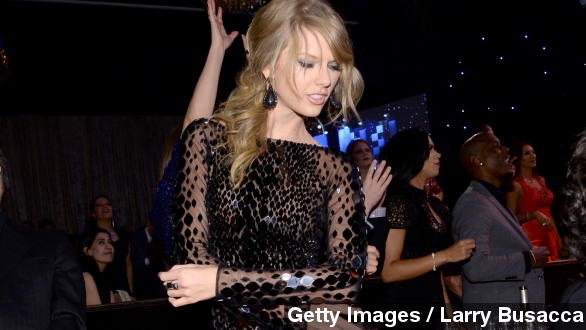 For all you Taylor Swift fans, Monday brought some good news and some bad news.

The good news: Just a week after her new album "1989" dropped, the pop star announced a world tour that begins in May.

Now let's rip off that Band-Aid and give the bad news that's really making headlines — a breakup that's sure to leave plenty of teardrops on guitars. Oh, but Taylor won't be the one crying this time.

Ms. Swift gave Spotify the boot — she has removed all her songs from the free app. So if you loved listening to the songstress on Spotify, grab a tissue or your wallet. (Video via Big Machine Records / Taylor Swift)

WNYW: "She did a bunch of smart things. ... She refused to have it up on Spotify, and she did a special release for Target, so she made people buy the album."

Officials at Spotify are almost certainly not just shakin' this one off. Swift is on more than 19 million of its users' playlists.

In what The New York Times called a passive-aggressive response, The Spotify team released a statement saying, in part, "We hope she'll change her mind and join us in building a new music economy that works for everyone."

But Taylor Swift has made it clear she doesn't agree with Spotify's business model. In an op-ed she penned for The Wall Street Journal back in July, the singer wrote: "Music is art, and art is important and rare. Important, rare things are valuable. Valuable things should be paid for. It's my opinion that music should not be free."

The New York Times also points to artists such as Beyonce, Coldplay and Adele who have, for a limited time, withheld their music from the streaming service in the past.

CNBC: "I think it's also very interesting the timing of this. This comes on the heels of her first-week album album sales for '1989.' Those are expected to be record numbers."

Record numbers, indeed. In true Taylor style, Billboard predicts "1989" will sell at least 1.3 million copies through Nov. 2. No woman has done that since Britney Spears released her debut album in 2000.

As for the future of the T. Swift/Spotify relationship, she hasn't said whether the move is permanent, but judging from similar incidents in the past, we'd guess they'll probably kiss and make up — if only for the fans.