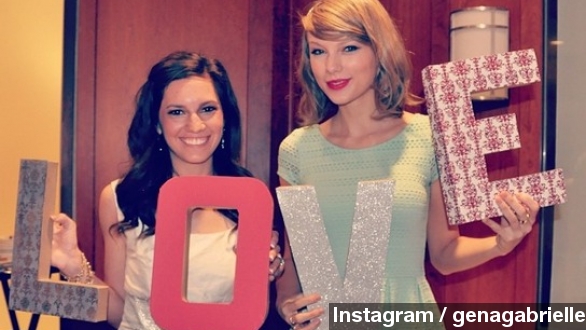 By Christine Slusser
April 15, 2014
Taylor Swift surprised a fan named Gena by showing up at Gena's bridal shower. The singer even brought a gift and homemade cookies.
SHOW TRANSCRIPT

Taylor Swift did something pretty awesome for a fan. Not only did she show up to her fan's bridal shower — she also brought gifts!

Swift roadtripped all the way to Ohio so she could go to a fan named Gena's big day. The two met at a meet-and-greet in 2007. Gena sent Swift an invitation to the wedding, but reportedly the singer couldn't make that, so she showed up at the bridal shower. (Via Big Machine Records, LLC. / Taylor Swift)

She did, though, make the shower. This was the social media moment of a lifetime.

Gena posted about Swift's stop-in on Instagram. She wrote she couldn't believe the singer showed up. People were gushing over the photo, calling the country star "the sweetest."

Gena also noted her mother called them "the same person," writing they both love coffee and sugar. (Via Instagram / genagabrielle)

The star gifted Gena a KitchenAid mixer as well as some cookies she baked and her own recipe. Swift noted it was her first bridal shower ever.

But let's not forget the husband-to-be. Time wonders if Swift was trouble when she walked in.

"​Her fiancé probably hates Taylor Swift now, though, because he knows his wife-to-be will never be as excited to see him as she was to see T-Swift."

This latest sweet move by the Swiftinator comes after she visited sick children in the hospital a few weeks ago. (Via YouTube / Shelby Huff)

What do you think of Swift's sweet moves? Tweet us and let us know.