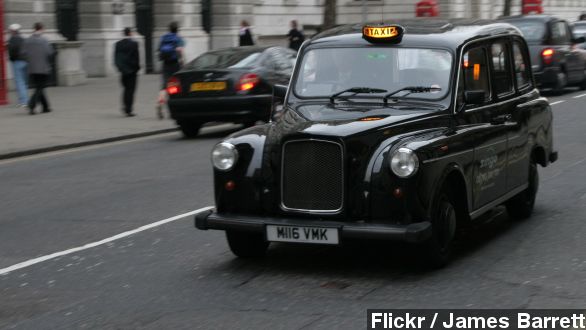 By Evan Thomas
June 11, 2014
Taxi drivers in several European countries are slowing down or walking off the job Wednesday in protest of Uber and other private-car companies.
SHOW TRANSCRIPT

Good luck getting a cab in a good chunk of Europe Wednesday — cab drivers in Great Britain, France, Germany and Spain are slowing down or stopping service entirely in protest of private-car companies such as Uber.

"Taxi drivers here in London are promising chaos. We are expecting anywhere from 10-12,000 black cabs to show up for these protests starting at 2 p.m. here today London time." (Via Bloomberg)

The transit workers say Uber and similar services cut into the traditional role of taxis, without paying the fees and licensing they have to.

"It's selling bread on a table in front of a baker shop without paying taxes or welfare charges. Unfair competition, that's what it is." (Via France 24)

Drivers in Madrid are reportedly taking the day off work. In France, taxis are jamming traffic with "escargot" operations — driving at a snail's pace. (Via Twitter / @Taxis_FR)

Uber appears to be taking the protests and publicity at face value. The Wall Street Journal quotes Uber's general manager for Western and Northern Europe:

"If anything, it's going to make Uber even more visible, and make a lot of people realize that they now have choices that they didn't have before."

The protests coincide with Uber's launch of UberTAXI in London. Starting today, Londoners can use Uber's app to book one of London's iconic black cabs, not just a private vehicle.

The UK’s Institute of Directors likened the outcry from cabbies — and Uber's continued rollouts in the face of them — to failed attempts to contain the spread of the power loom in the 19th century, telling the BBC:

"Black cabs have been a symbol of London for many decades, known across the world. But symbols, no matter how iconic, cannot be allowed to stand in the way of innovation." (Via BBC)