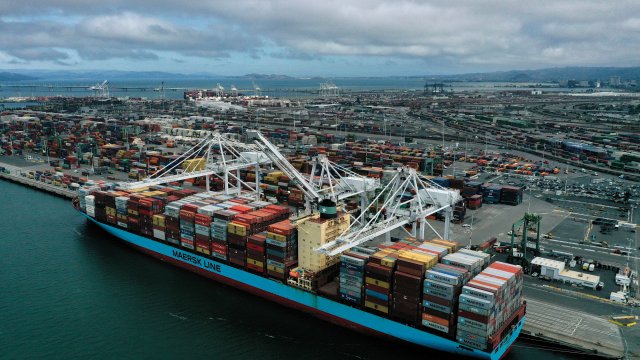 SMS
China Might Have To Look Beyond Tariffs If Trade War Escalates Again
By Matt Picht
By Matt Picht
May 13, 2019
The White House is threatening new tariffs on China as part of the ongoing trade war — and China might not be able to respond in kind.
SHOW TRANSCRIPT

Tariffs are still the preferred weapon in the U.S.-China trade war. But the latest round of retaliation shows China might not have much more left it can do on that front.

Last year China sent about $539 billion worth of exports to the U.S., but imported only about $120 billion in U.S. goods. U.S. tariffs currently only cover about half of its imports from China, while China's tariffs have hit nearly all of the products it receives from the U.S.

Because the U.S. imports so much more stuff from China, it has more room to tax those imports. But China's pretty much maxed out on stuff to tax to respond to new tariffs in kind.

Right now, the U.S. and China are just raising tariffs on goods they've already taxed before. But President Trump has threatened to expand U.S. tariffs to cover all of China's exports to the country if they don't strike a deal.

If the White House makes good on that threat, China might have to find another way to retaliate — potentially by striking out at American businesses directly. The country's state-run media has floated canceling China's investments in U.S. agriculture and energy, among other options.

The White House has argued that it has the upper hand in the conflict thanks to a strong U.S. economy. China's central bank estimates the trade war could shave 0.3 percentage points off the country's GDP, which could weaken China's slowly-recovering economy.

But while that might help the U.S. strike a quick deal to end the trade war, it won't achieve the U.S.'s main goal of fundamental economic reform in China. Chasing that goal will turn the dispute into a longer-term battle of endurance, which might give China more of an even footing.