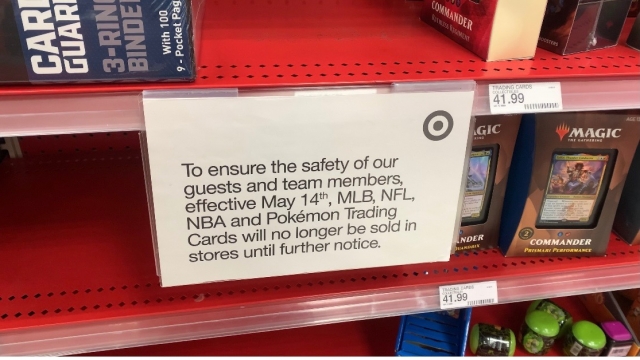 The company made the decision to temporarily stop selling them in stores after things got violent over sports trading cards at one of its locations.

Sports trading cards and Pokemon cards are not being sold inside Target stores.

In a statement sent to Newsy, Target said: "Out of an abundance of caution, we've decided to temporarily suspend the sale of MLB, NFL, NBA and Pokémon trading cards."

This after a recent violent dispute at one of its Wisconsin locations over sports trading cards. A man was reportedly physically assaulted by four men in the store’s parking lot.

I went and checked to see if there were any left at my local Target.

I asked a Target employee: "Hi, do you know where the Pokémon trading cards are located?" The employee said: "We actually stopped selling them in-store."

It looks like all of the trading cards are gone. They even have a sign up that says effective today, May 14th, trading cards will no longer be sold in stores "until further notice."

It’s not all bad news… customers can still buy the cards online.

Demand for trading cards has gone wild after becoming insanely popular during the coronavirus pandemic… and their value has gone through the roof.

Before the ban, Target put a limit on how many card items people could buy. The company did not say when they will start selling trading cards in stores again.