Target's OCD Christmas Sweater Is Ugly For The Wrong Reasons 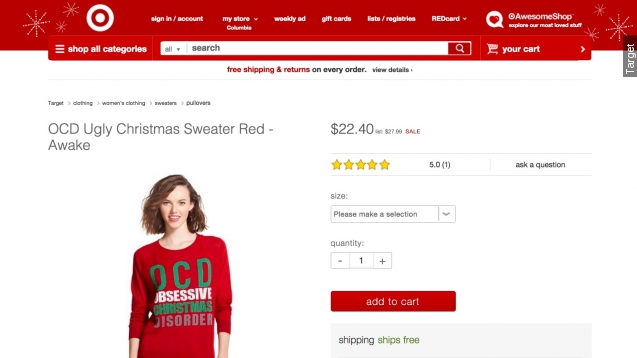 SMS
Target's OCD Christmas Sweater Is Ugly For The Wrong Reasons
By Samantha Crook
By Samantha Crook
November 11, 2015
Some shoppers think Target's "Obsessive Christmas Disorder" sweater is in poor taste. But Target has no plans to remove it.
SHOW TRANSCRIPT

Some Target shoppers believe a sweater with the phrase "OCD: Obsessive Christmas Disorder" has gone a little too far.

The company is being criticized for making light of mental illness, and some are asking Target to stop selling the sweater. (Video via Target)

"Oh, that is not good," Elmo said in a Target commercial.

The sweater also brought attention to other retailers, such as Cracker Barrel, referencing mental health with their holiday merchandise.

A Target spokesperson told Time: "We never want to disappoint our guests and we apologize for any discomfort." (Video via Target)

Target says it doesn't currently have plans to remove the sweater.