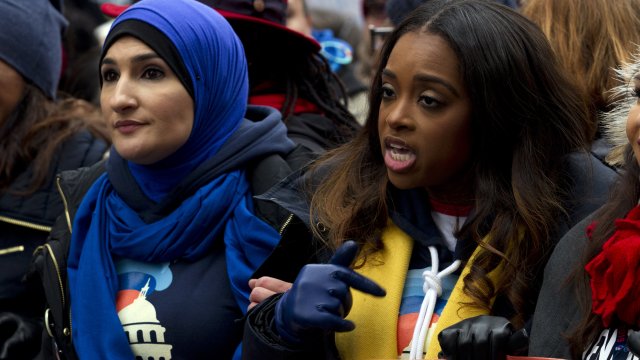 In the days following George Floyd's death, Tamika Mallory went to Minneapolis and took to the streets like so many others demanding justice.

But it was her words during a press conference that permeated the country.

MALLORY: "It's an unfortunate feeling … I know the Derek Chauvins of the world are many. He's not alone. And we know that because there is a young man who literally had to wait for George Floyd to be killed for there to be attention on his issue when he also experienced the same type of abuse from Derek Chauvin."

Chauvin was recently indicted by a federal grand jury in connection with a 2017 incident where he allegedly struck a teenager "multiple times in the head with a flashlight" and held his knee on the teen's neck while he was ''lying prone, handcuffed, and unresisting."

MALLORY: "The work is so much broader than just George Floyd. George Floyd was a moment that needed to happen so that other people during a pandemic could stop and see."

Floyd's death was the catalyst for what some experts believe to be the largest civil rights demonstration in U.S. history. There were protests in all 50 states, and polls suggest more than 20 million people took the streets in the two weeks following Floyd's death.

But Mallory says the real work lies ahead of her, with people like Ma'Khia Bryant, who was shot and killed by an officer in Columbus, Ohio, while attacking another teen with a knife. Bryant's case hasn't received the same attention nor the same support George Floyd did.

MALLORY: "I went to the funeral for Ma'Khia Bryant because I know that if she was a 'perfect victim,' the seats would have been filled. Everyone would have been there as if it was a concert."

JAMAL: "So often this 'perfect victim' narrative in police killings goes unspoken, but the truth is there are aspects to George Floyd's murder that made that case palatable for a larger audience. Ma'Khia Bryant doesn't have a lot of those things. How do you go about navigating that?"

MALLORY: "I look at most of it and try to figure out where do we have the best opportunity to use this particular incident, as a part of the larger narrative of what we're fighting for? And I think Ma'Khia Bryant is one of those. I need to make sure that people understand that the same police department that killed your perfect victim killed Ma'Khia, as well."

In Mallory's new book, 'State of Emergency,' she offers potential solutions for addressing police brutality — first among them, defunding police.

MALLORY: "Am I an abolitionist? Absolutely. Do I want to get to a point where there are no police in our communities with guns? Absolutely. Are we there in this very moment? No. Why? Because we've been trained that if a person in your home has a mental health breakdown, you have to call 911. We want to start changing and moving away from that by giving people other resources and tools, but they need money…We need resources to be able to undo all the harm that has been done to our communities."