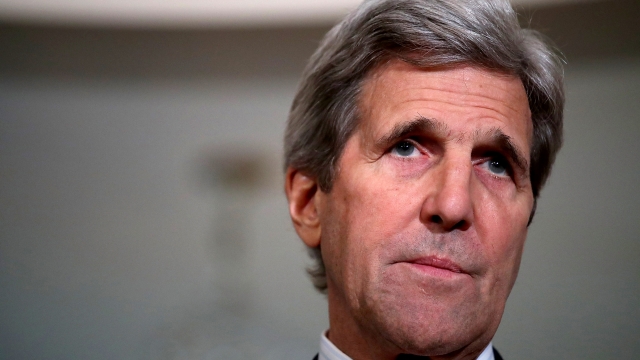 At least two explosions hit Afghanistan's capital just an hour after U.S. Secretary of State John Kerry left — and he was the alleged target of the attacks.

The Taliban has claimed responsibility for the missile strikes, but officials say no one was injured. Gunshots were also reportedly heard.

Kerry made a surprise visit to Kabul on Saturday to discuss Afghanistan's government stability and human rights with the country's leaders.

Before the strikes, Kerry said in a joint statement with Afghanistan's president, "We call on the Taliban to enter into a peace process ... that provides equal rights protection for all Afghans and brings to an end the violence."

There have been multiple pushes for international talks among the Taliban and several countries, including the U.S. and Afghanistan — but the Taliban has backed out for different reasons.

This video includes clips from the Taliban, Channel 4, TOLOnews, an image from Getty Images, and music from Chris Zabriskie / CC BY 4.0.