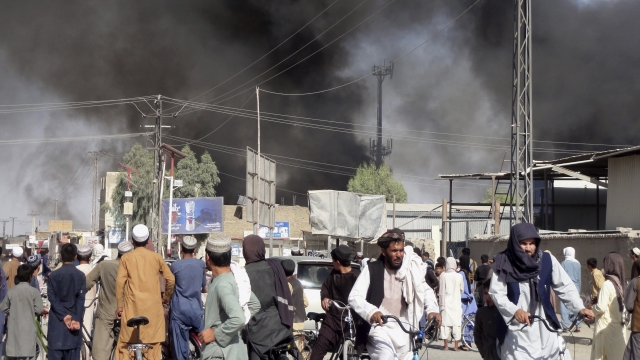 The Taliban completed their sweep of the country's south on Friday as they took four more provincial capitals in a lightning offensive that is gradually encircling Kabul, just weeks before the U.S. is set to officially end its two-decade war.

In just the last 24 hours, the country's second- and third-largest cities — Herat in the west and Kandahar in the south — have fallen to the insurgents as has the capital of the southern Helmand province, where American, British and NATO forces fought some of the bloodiest battles of the conflict.

The blitz through the Taliban's southern heartland means the insurgents now hold half of Afghanistan's 34 provincial capitals and control more than two-thirds of the country — weeks before the U.S. plans to withdraw its last troops. The Western-backed government in the capital, Kabul, still holds a smattering of provinces in the center and east, as well as the northern city of Mazar-i-Sharif.

While Kabul isn’t directly under threat yet, the resurgent Taliban were battling government forces in Logar province, some 80 kilometers (50 miles) from the capital. The U.S. military has estimated that Kabul could come under insurgent pressure within 30 days and that the Taliban could overrun the rest of the country within a few months. They have already taken over much of the north and west of the country.

In the south, the insurgents swept through the three provincial capitals on Friday.

Attaullah Afghan, the head of the provincial council in Helmand, said that the Taliban captured Lashkar Gah following weeks of heavy fighting and raised their white flag over governmental buildings. He said that three national army bases outside of the city remain under control of the government.

Atta Jan Haqbayan, the provincial council chief in Zabul province, said the local capital of Qalat fell and that officials were in a nearby army camp preparing to leave.

In the country's west, meanwhile, Fazil Haq Ehsan, head of the provincial council in Ghor province, said its capital, Feroz Koh, also fell to the insurgents.

With security rapidly deteriorating, the United States planned to send in 3,000 troops to help evacuate some personnel from the U.S. Embassy in Kabul. Separately, Britain said about 600 troops would be deployed on a short-term basis to support British nationals leaving the country, and Canada is sending special forces to help evacuate its embassy.

Thousands have fled their homes amid fears the Taliban will return Afghanistan to the sort of brutal, repressive rule it imposed when it was last in power at the turn of the millennium. At that time, the group all but eliminated women’s rights and conducted public executions as it imposed an unsparing version of Islamic law. An early sign of such tactics came in Herat, where insurgents paraded two alleged looters through the streets on Friday with black makeup smeared on their faces.