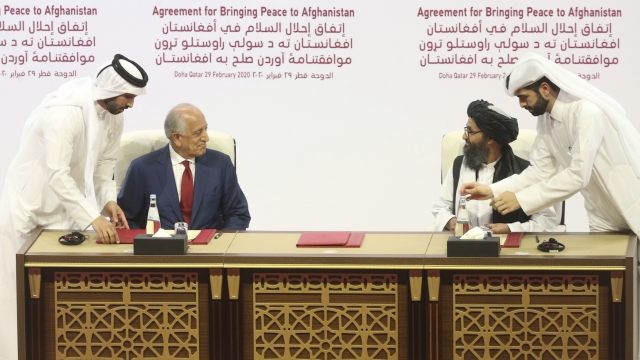 The Taliban says the U.S. and Afghan government have violated the peace deal, but the U.S. military has called the claims "baseless."

The Taliban has accused the U.S. and the Afghan government of allegedly violating terms under a peace deal and has called on U.S. and Afghan officials to "abide by the contents of the agreement."

In a statement issued Sunday, the Taliban said it had restricted attacks on Afghan security forces, but that the U.S. had carried out drone strikes on civilians. The group also said the Afghan government had delayed the promised release of 5,000 prisoners in exchange for 1,000 government personnel.

The U.S. military called the Taliban's claims "baseless," with a spokesman saying the U.S. would continue to defend its partners "in compliance with the agreement." The American military spokesman also called for a reduction in violence and for efforts to be focused on fighting the spread of the coronavirus in Afghanistan.

The spread of the virus in Afghanistan comes at an especially precarious time for the impoverished, war-torn country. The ongoing election dispute between Afghan President Ashraf Ghani and rival Abdullah Abdullah has not only stalled negotiations with the Taliban, but resulted in a drastic reduction in U.S. aid.

The Taliban has reportedly said it would "allow and support government health workers or NGOs" who can help people, and that it would impose a ceasefire in areas where infection was reported.