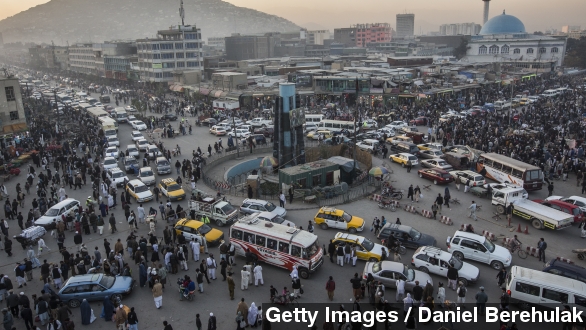 The latest Taliban attack in Afghanistan has claimed the lives of five people, including a British national, and injured dozens more.

A car loaded with explosives detonated right as a convoy of British diplomatic vehicles was passing — killing two members of the embassy team: a British security officer and an Afghan embassy employee. (Video via Radio Free Europe/Radio Liberty)

A suicide bomber detonated the explosives on a busy road, injuring at at least 30 others including children. The British foreign minister confirmed the death and condemned the attack.  (Video via Press TV)

Although the Taliban has stepped up its attacks, and bombings are increasingly common, attacks on embassy vehicles like this one remain rare.

The BBC's Waheed Massoud explains, "It is not very common that incidents happen involving diplomatic vehicles because they travel in very secure vehicles and huge convoys and they try to avoid routes that are dangerous."

Less than a week ago, another Taliban attack at a volleyball tournament in eastern Afghanistan killed more than 50 people and injured at least 50 others.

The offensive is especially apparent in northern Afghanistan. The New York Times writes "The state of the province is reminiscent of 2009, when the Taliban had mostly cut off the city just before thousands of American troops were dispatched to beat them back."

That's raised concerns, especially as NATO troops continue to scale down their presence in the middle eastern country, with the U.S. troop presence in Afghanistan slated to end by 2016. (Video via U.S. Department of Defense)