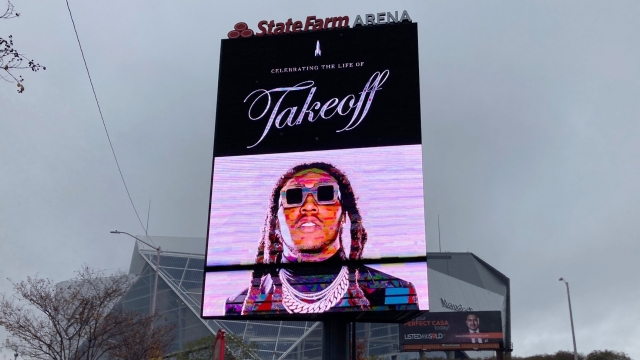 A funeral was held Friday for rapper Takeoff, who was killed last week in an altercation in Houston, Texas.

As rain poured into the peach state, fans of rapper Takeoff gathered at the State Farm Arena to celebrate the life and musical legacy of one of Atlanta, Georgia's own, with some fans seeing the rain as a symbol of hope and new beginnings despite the tragedy.

Kirsnick Khari Ball, commonly known as Takeoff, was killed last week in a shooting outside a Houston bowling alley. He was amongst two others that were wounded that morning.

The 28-year-old was the youngest member of the Grammy Award-nominated rap group Migos. Joined by his uncle Quavo and cousin Offset, the trio shocked the world in 2018 when they tied with The Beatles for the most simultaneous Hot 100 entries among any group on the billboard charts.

Now the legacy of Migos will carry the weight of the loss of another hip hop star to gun violence.

"We're still rebuilding from the losses of folks like PnB Rock and folks like Nipsey Hussle and even Tupac and Biggie, some of us," said Dr. A.D. Carson, assistant professor of hip hop and global south at the University of Virginia. "This happens, and we're like, yo again?"

According to XXL, there have been 91 documented rapper deaths from 1987 to present date.

Takeoff — who was part of Migos along with Quavo and Offset — was 28.

Every violent high-profile killing in America brings a renewed sense of urgency to seek the answers to why violence persists, but the answer to that question is not black and white.

"What is rampant violence on a daily basis, and a good portion of that is gun violence," Dr. Carson said. "So the questions that we are asking about what we should do within Black communities, what we should do within the hip hop communities, are questions that we really need to be asking America. What are we going to do about this epidemic of gun violence that is plaguing all of us?"

Dr. Carson believes the solutions to the uptick in violence in America is outside of the entertainment industry.

But people in the community think the death of Takeoff won't be enough to create change from within.

"The way this world is, there's nothing we can do," said Nikki Harvard, an attendee of the Takeoff celebration of life. "Everyone's got their own mind. They get gassed up on all these drugs, and it flips them out. We can't go to everybody's individual house and make them change."

"I think that that's the all-American thing to do is when a terrible thing happens, then we like to point the finger at something so that we don't have to look in the mirror and be accountable for what we are all attempting to live with," Dr. Carson said. "But the reason that we can't live with it is because so many of us are dying from it. "

In the meantime, Takeoff's family, friends and fans are taking a moment to reflect and mourn the loss of another cherished member of their community.