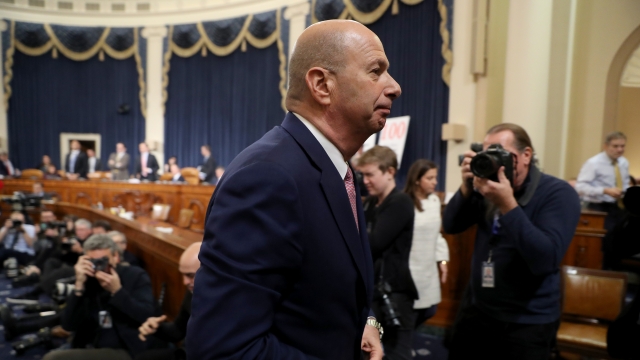 EU Ambassador Gordon Sondland under oath telling lawmakers and America security assistance to Ukraine was tied to a public announcement of an investigation into the 2016 election and Ukrainian energy giant Burisma.

Sondland: "Mr. [Rudy] Giuliani's requests were a quid pro quo for arranging a White House visit for Zelenskyy. Giuliani demanded that Ukraine make a public statement announcing investigations of the 2016 election and Burisma. Mr. Giuliani was expressing desires of the president."

At the time, Sondland says he was not aware that a push for investigating Burisma really meant investigating the Bidens. But, he says he understands that now. Sondland, tasked with helping to facilitate a meeting between President Trump and the newly elected Ukrainian president, said his team did not want to work with the president's personal attorney Rudy Giuliani to facilitate the relationship, but they were directed on multiple occasions to "talk to Rudy."

GOP counsel Steve Castor: "You testified that Mr. Giuliani was expressing the desires of the president, correct?"

Castor: "But how did you know that? Who told you?"

GOP Rep. Michael Turner: "No one on this planet told you that President Trump was tying a to investigations: yes or no?"

Turner: "So you really have no testimony today that ties President Trump to a scheme to withhold aid from Ukraine and exchange for these investigations."

Sondland: "Other than my own presumption."

Turner: "Which is nothing.”

Other Republicans questioned whether Sondland is wrong about there being a quid pro quo at all.

Rep. Jim Jordan: "I mean, you got all three of them wrong. They get the call, they get the meeting, they got the money. It's not two plus two, it's oh for three."

This hearing may leave Democrats on the committee with more questions. In his testimony, Sondland named numerous officials including the vice president, Secretary of State Mike Pompeo, acting White House Chief of Staff Mick Mulvaney and Wisconsin Sen. Ron Johnson as being aware of this situation as it unfolded. He also testified — similarly to his original deposition — that he didn't recall some situations being described to him, but that details are in documents the State Department and the White House are refusing to release. Sondland echoed Democrats' desires for their release.

All of this as the president defends himself, saying once again there was no quid pro quo.

Sondland denied previous testimony that he demanded investigations in a July 10 meeting with Ukrainians. Fiona Hill, who says she was there and heard those comments, will testify Thursday morning.