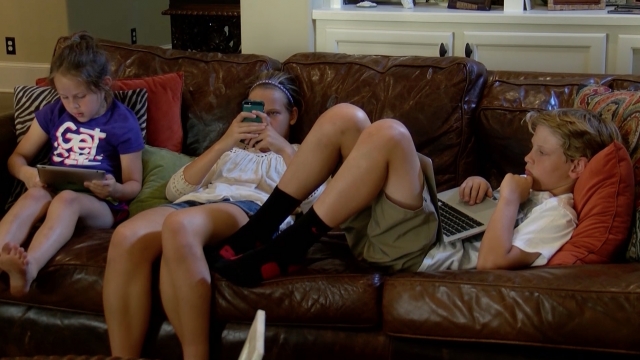 The American Academy of Pediatrics recommends restricting how much time kids spend with screens, but the limits depend on how those screens are used.

Summertime is around the corner, and that means more free time for iPads and TV, right? The American Academy of Pediatrics hopes that answer is no.

The most recent AAP recommendation, released in 2013, says parents should limit screen time for kids over 2 years old to two hours a day. But experts recognize not all technology use is created equal.

"Is it basically consuming them? Are they passively watching it? Or is it a program that they're using to actively create something? Or are they using it for communication?" Moorjami asked.

A July 2015 survey of parents with kids under 18 found that 53 percent thought their kids spent too much time using devices. That same survey found that a little less than half of parents set time limits for screen time.

"Now, it's really the smartphones and the laptops that are the biggest screen time that we have to deal with," said Chip Herron, a father of six.

But there are parents who purposely choose to not limit screen time for their kids. Many of those parents point to educational apps or the desire to teach kids to control their own device use. But some are quick to note unlimited screen time is not OK either and write, "Please don't think we let our children vegetate," or, "I'm not saying I will allow him to play on a tablet all day, every day."

The AAP is currently developing new screen time recommendations, and those will be released in October. But its preliminary advice seems to loosen the reins, including recommendations for tech-free zones and considering the quality of the content more than the time.