Checking Your Phone All The Time? Going Grayscale Might Fix That 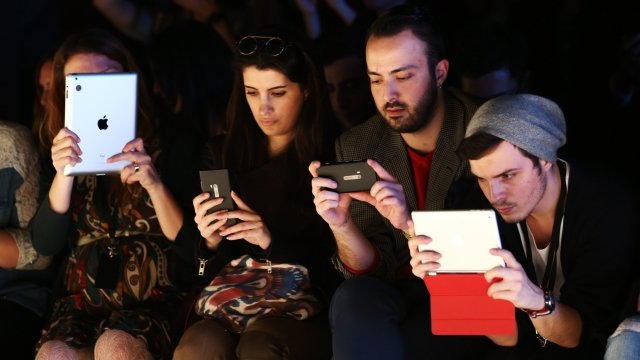 Chances are, you've checked your smartphone in the past 18 minutes. That's the average for all age groups in America.

For millennials, it's more like every 10 minutes. Are we addicted? Well, most people in one survey said they could not go more than one day without food, water — or their phones.

What makes them so irresistible? All those bright colors. That dopamine jolt when you get a text or an email or a "like."

Even when we want to unplug, it's not easy, and that's no accident. Phones and apps are engineered to keep you coming back for more.

It's basic packaging. We've seen this other places. No matter what the product is — toothpaste, cereal, detergent — a package wrapped in rich colors is more alluring. And then there's the stuff inside. Buy one box of Lucky Charms. The brownish oat puffs probably aren't the star, it's the shamrocks and rainbows, the shooting stars, that grab a person's attention. The same goes for apps.

"Color and shape, these are the icebreakers when it comes to grabbing people's attention, and attention is the new currency," a neuroscience tech exec told The New York Times. He consults for Facebook.

There's a sort of movement underway for avoiding all those flashy, colorful objects on smartphones. It's called "go gray," and it’s really about taking control.

The movement is linked to Tristan Harris, former design ethicist at Google and founder of the non-profit Time Well Spent, who says we need to "realign technology with humanity’s best interests." The website argues that "Colorful icons give our brains shiny rewards every time we unlock" and recommend that users "set your phone to grayscale to remove those positive reinforcements. It helps many people check their phone less."

Black and white brings a little bit of good boredom to smart devices. The "grayscale" mode typically hides in the setting menus that control accessibility or display.  Companies don’t necessarily want you to flipping this switch, but it’s a powerful tool.

Less mindless scrolling. Fewer taps on apps you weren't planning to explore. And a little more time for what’s important that’s the idea anyway. Does it work? Go gray and see what you think. And don't forget boring is good.