Take Bernie Sanders' Big Gains With A Grain Of Salt 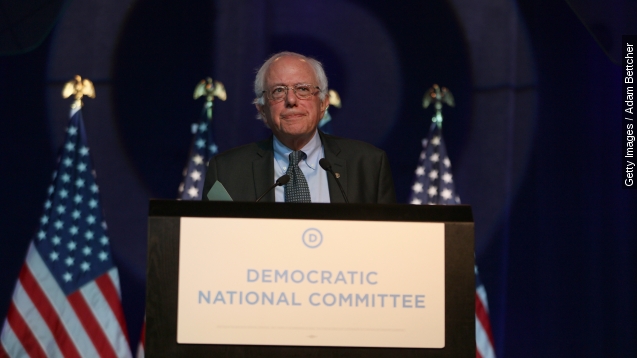 Stop the presses: Bernie Sanders is leading Hillary Clinton in a major poll and by a lot.

Ok, now start the presses up again because that's only part of the story.

A new NBC / Marist poll shows Sanders with a whopping 11-point lead in New Hampshire, where just a month and a half ago he was trailing Clinton by 13 points. (Video via Bernie 2016)

In Iowa, Sanders is still trailing Clinton, but the gap has narrowed from 29 points to 11.

But Sanders' gains don't only reflect his increased popularity — which is undeniable at this point. They also highlight Clinton's increasing unpopularity. (Video via KCAL)

The same Iowa poll found Clinton has lost seven points since July, and her support among moderates and independents has plummeted. The State Department releasing more of her emails probably didn't help that, either. (Video via CBS, CNN)

But Sanders' gains nationally have continued to be slow.

Statistician Nate Silver laid out a pretty simple explanation for Sanders' success in the two chosen states: "Democratic caucus-goers in Iowa and Democratic primary voters in New Hampshire are really liberal and really white, and that's the core of Sanders's support." (Video via MSNBC)

Sanders himself has addressed his need to reach out to more minority voters.

"We have a long, long way to go, and I will not deny to you for one minute that we have to substantially increase our outreach to the Latino community and to the African American community," Sanders told MSNBC's Andrea Mitchell.

And Clinton's time as first lady and secretary of state means she's got a lot more name recognition than the Vermont senator. (Video via C-SPAN)

But whether that will help her or hurt her in the long run remains to be seen and probably depends on how many more emails the State Department has to release.