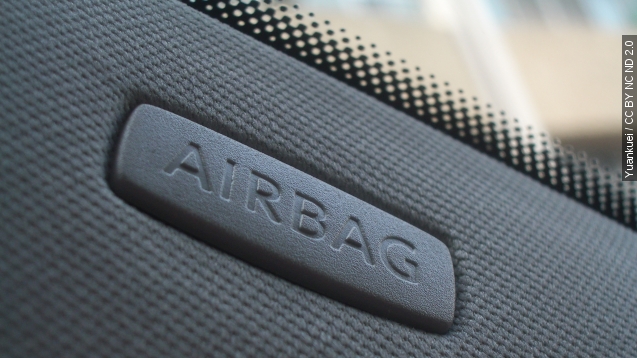 SMS
Takata's Problems Balloon While Its Stock Price Tumbles
By Jamal Andress
By Jamal Andress
May 20, 2015
Takata air bags are believed to have caused five deaths in the U.S. The faulty air bags can launch shrapnel at dangerous speeds if deployed.
SHOW TRANSCRIPT

Since Japanese auto parts manufacturer Takata announced an initial recall of its air bags in 2014, the problems for Takata have ... well, inflated.

"The largest consumer recall ever, and it involves automobile air bags that have the potential to explode," a CBS anchor said.

Nearly 34 million vehicles have the affected Takata air bags, making this one of the largest auto recalls in U.S. history.

This recall comes after months of debate between Takata and the National Highway Traffic Safety Administration.

Takata air bags are believed to be the cause of five deaths in the U.S. and more than 130 injuries worldwide. The faulty air bags can launch pieces of shrapnel at dangerous speeds if deployed. (Video via CNN)

"Up until now, Takata has refused to acknowledge that their air bags are defective. That changes today," said U.S. Transportation Secretary Anthony Foxx.

According to the Bureau of Transportation Statistics there are more than 250 million vehicles on the road in the U.S. This recall affects more than 13 percent of those vehicles. And while the reported deaths have all been in Honda vehicles, the injuries from Takata air bags expand across more than 10 different automakers.

As you might imagine, this recall doesn't bode well for the Takata corporation, which has 56 plants in 20 countries and more than 43,000 employees.

Since this time last year, Takata's stock price has fallen by about 35 percent. Based on exchange rates when the latest report was released, the company also reported a net loss of about $269 million for the fiscal year.

Also, Takata's competitor in air bag manufacturing Autoliv is reaping the benefits of this huge recall – Autoliv is under contract for 25 million air bag inflators to replace the Takata air bags under recall.

Chief among those is Honda, Takata's largest customer. Rumors have been swirling that after all this is over, Honda could stop working with Takata, which would take a huge chunk out of the company's bottom line.

But Takata's biggest problem might not involve finances. After all this time, it still doesn't know the root cause of this devastating air bag flaw. While Takata knows humidity and moisture are contributing factors, it is not known what causes the air bags to malfunction.