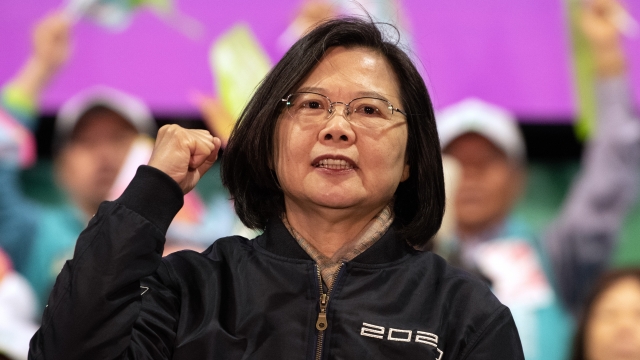 Taiwan has re-elected Tsai Ing-wen as President in a landslide victory that showcased the country's support for her tough stance against China, which still claims the territory as its own.

On Saturday, Tsai handily defeated leading challenger Han Kuo-yu, a member of the China-friendly Nationalist Party, receiving 57.2% of the vote to Han's 38.6%.

Soon after her victory, Tsai addressed ongoing tensions with China over Taiwan's sovereignty, saying: "Today I want to once again remind the Beijing authorities that peace, parity, democracy and dialogue are the keys to stability ... I want the Beijing authorities to know that democratic Taiwan and our democratically elected government will never concede to threats."

China, which has long sought to prevent Taiwan from ever gaining independence, sought to isolate the island territory during Tsai's first term. Over the last two years, the mainland country has severed all formal ties with Tsai's government, restricted visits from Chinese tourists, and excluded representatives from Taiwan from international gatherings.

In a statement, Secretary of State Mike Pompeo congratulated Tsai and applauded "her commitment to maintaining cross-Strait stability in the face of unrelenting pressure." He added: "Under her leadership, we hope Taiwan will continue to serve as a shining example for countries that strive for democracy, prosperity, and a better path for their people."