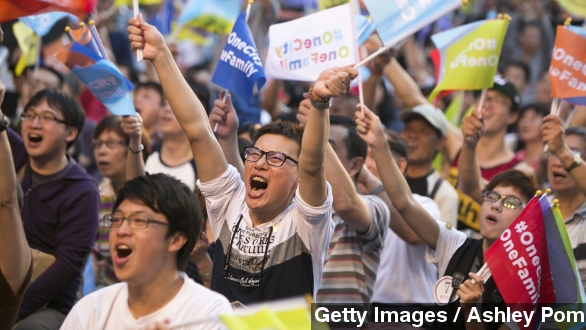 Premier Jiang Yi-Huah stepped down after taking political responsibility for the huge losses suffered by his Kuomintang, or KMT, party. Jiang's resignation also triggered the exit of the current cabinet ministers; new ministerial appointments are expected to be made shortly.

Polling results aren't all in yet, but the KMT's losses are already abundantly clear; the party lost control of traditional strongholds to the rival Democratic Progressive Party, or DPP. The KMT also gave up five of the six key municipal elections to elect mayors for Taiwan's major cities.

That includes the capital city of Taipei, where DPP-endorsed independent candidate Ko Wen-jie handily defeated KMT candidate Sean Lien in the mayoral race. The position is a springboard to becoming Taiwan's president, and the election is often a significant bellwether of public opinion.

All told, these results are a major political blow to the KMT president Ma Ying-Jeou, whose second and final four-year term end in 2016. The local elections are widely viewed as a referendum on Ma's attempts to forge closer ties with mainland China.

China has long viewed Taiwan as a renegade province since the two nations split in 1949, and "reunification" has been a stated goal of Chinese officials in the past. KMT leaders have encouraged bilateral relations with China, while the DPP opposes encroaching Chinese influence on the country.

And many citizens side with the DPP on this issue; in March, student protesters occupied the country's legislature for weeks to protest a trade agreement with China.

The outcome of the local elections is also a warning sign to both China and the KMT ahead of the presidential elections when Ma steps down in 2016. It remains to be seen if the KMT will turn away from Beijing, or if China will make overtures to the DPP, during the next two years.