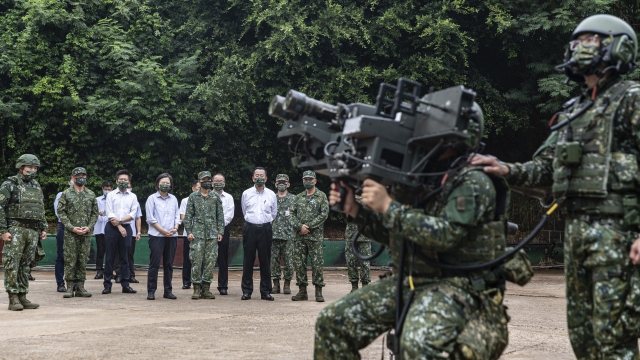 Taiwan’s military fired warning shots at drones from China flying over its outposts just off the Chinese coastline, underscoring heightened tensions and the self-ruled island's resolve to respond to new provocations.

Taiwan's forces said in a statement that troops took the action on Tuesday after drones were found hovering over the Kinmen island group. Dadan, one of the islands where a drone was spotted, lies roughly 9 miles off the Chinese coast.

The statement Wednesday referred to the unmanned aerial vehicles as being of “civilian use," but gave no other details. It said the drones returned to the nearby Chinese city of Xiamen after the shots were fired. Taiwan previously fired only flares as warnings.

China accuses the U.S. of encouraging the island's independence through the sale of weapons and engagement between U.S. and Taiwanese politicians.

The incident comes amid heightened tensions after China fired missiles into the sea and sent planes and ships across the dividing line in the Taiwan Strait earlier this month. It followed angry rhetoric from Beijing over a trip to Taiwan by House Speaker Nancy Pelosi, the highest-ranking U.S. dignitary to visit the island in 25 years.

China claims Taiwan as its own territory and its recent actions have been viewed as a rehearsal of a possible blockade or invasion. China's drills brought strong condemnation from Taiwan's chief ally, the U.S., along with fellow regional democracies such as Australia and Japan. Some of China's missiles early in August fell into nearby Japan's exclusive economic zone.

Taiwan maintains control over a range of islands in the Kinmen and Matsu groups in the Taiwan Strait, a relic of the effort by Chiang Kai-shek's Nationalists to maintain a foothold on the mainland after being driven out by Mao Zedong's Communists amid civil war in 1949.

Taiwan's Defense Ministry said China's actions failed to intimidate the island's 23 million people, saying they had only hardened support for the armed forces and the status quo of de-facto independence.

Officials said anti-drone defenses were being strengthened, part of a 12.9% increase in the Defense Ministry’s annual budget next year. The government is planning to spend an additional $1.6 billion, for a total of $13.8 billion for the year.

The U.S. is also reportedly preparing to approve a $1.1 billion defense package for Taiwan that would include anti-ship and air-to-air missiles to be used to repel potential Chinese invasion attempt.

Following the Chinese drills, the U.S. sailed two warships through the Taiwan Strait, which China has sought to designate as its sovereign waters. Foreign delegations from the U.S., Japan and European nations have continued to arrive to lend Taipei diplomatic and economic support.

Arizona Gov. Doug Ducey is currently visiting Taiwan to discuss production of semiconductors, the critical chips that are used in everyday electronics and have become a battleground in the technology competition between the U.S. and China.

Ducey is seeking to woo suppliers for the new $12 billion Taiwan Semiconductor Manufacturing Corp. (TSMC) plant being built in his state.

Taiwanese Air Force pilots have also trained at Luke Air Force Base outside Phoenix for more than 25 years, an indication of continuing U.S. support for Taiwan's defense despite the lack of formal diplomatic ties.

Reacting to Ducey's visit, China on Wednesday reaffirmed its opposition to any official contacts between the U.S. and Taiwan. That was a further reminder of the Communist Party's refusal to acknowledge the separation of powers within the U.S. government and the right of American local officials to operate independently of the administration.

“We urge the relevant parties in the U.S. to ... stop any forms of official contacts with Taiwan, and refrain from sending wrong signals to the Taiwan independence forces," Foreign Ministry spokesperson Zhao Lijian said at a daily briefing.