Taiwan And Chinese Leaders Meet For First Time In 66 Years 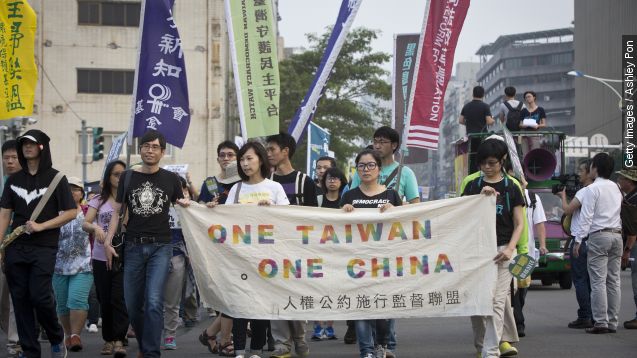 SMS
Taiwan And Chinese Leaders Meet For First Time In 66 Years
By Jake Godin
By Jake Godin
November 7, 2015
The Taiwanese and Chinese presidents met for the first time in 66 years. It was a pretty big deal.
SHOW TRANSCRIPT

The presidents of China and Taiwan met for the first time in 66 years. There were a lot of photos.

While discussions weren't exactly groundbreaking, Ma is quoted as saying they were done in a "friendly atmosphere" and were "very positive". (Video via Chung T'ien Television)

Some of the main points were the Chinese missiles that Taiwan says are currently pointed toward its island and a reconfirmation of the "1992 consensus." (Video via RT)

The consensus, sometimes referred to as the "One China" policy, effectively states while there are two governments, one in China and one in Taiwan, there is only one Chinese nation. (Video via Voice of America)

The One China policy is a major issue for some in Taiwan who would rather drop the policy and create a fully independent Taiwan nation.

One group skeptical of the One China policy comes in the form of the Democratic Progressive Party, whose presidential candidate is expected to do well in the upcoming 2016 elections. (Video via Formosa English News)