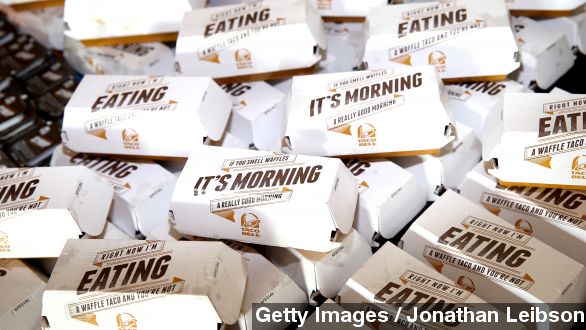 "It's another perfect morning in the Routine Republic, where happiness is eating the same breakfast," a new Taco Bell ad says.

Taco Bell is changing up its breakfast menu, all while trying to take down fast food industry leader McDonald's. Taco Bell released a new ad promoting its revised breakfast menu and urging people to break away from the normal breakfast routine.

The normal, boring breakfast routine being McDonald's, from the looks of it.

Throughout the ad, there are plenty of subtle messages — creepy clown guards, sausage-egg-McMuffin-looking land mines, a ball-pit moat filled predominantly with the colors red and yellow and so on.

It's all part of an updated breakfast menu Taco Bell is trying out — adding a chicken biscuit taco with the choice of jalapeno honey or gravy on the side.

The chain announced it, in part, in the form of this gif.

However, the Yum Brands-owned company will reportedly be subtracting the waffle taco, one of the first items Taco Bell released last year when it started serving breakfast.

Taco Bell has gone after McDonald's before — enlisting a handful of Ronald McDonalds to help the chain launch its breakfast menu.

"I'm Ronald McDonald, and I love Taco Bell's new breakfast menu," one of the men said in the ad.

Which, coincidentally, came out around the same time Chick-fil-A was trying out a chicken-and-waffle combo.