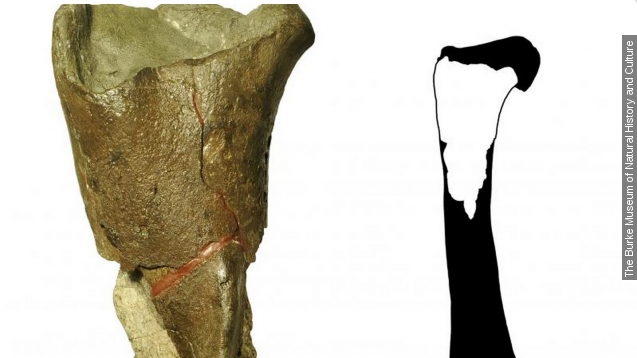 "And remember, if something chases you, run," says a character in "Jurassic World."

OK, so this story isn't that dramatic, but it does involve a T. rex-like bone. Researchers in Washington have discovered the state's very first dinosaur bone.

We mean, it only took 80 million years, but who's counting, right?

The Burke Museum of Natural History and Culture is pleased as dino punch about the find from its paleontologists, although it's just one bone. And they actually aren't totally sure what type of dinosaur it is but know it's "slightly smaller than T. rex."

But "small" to a T. rex isn't really ... small. The Seattle Times says: "Still, think of a transit bus to imagine its size. Think of a carnivorous transit bus with bone-crunching teeth."

You may have noticed the bone is not in the best of shape. It was found in Washington's Sucia Island State Park, and the fact it was found at all is "rare and lucky," according to the press release.

This is because during the time of the dinos, Washington state was mostly underwater.

The study's abstract comments on the find: "The Washington theropod represents one of the northernmost occurrences of a Mesozoic dinosaur on the west coast of the United States and one of only a handful from the Pacific coast. ... Its isolated nature and preservation in marine rocks suggest that the element was washed in from a nearby fluvial system."

And now they’ve had a chance to study it extensively. Their findings were published in the journal PLOS ONE.

No word if they plan to use bones from the dino's DNA to bring up a real-life Jurassic Park. It doesn't matter how many movies they make against it, we'd still visit a park that had real-life dinosaurs in it.

Washington is now in the dino club. Yeah, we made that up, but it should totally be a thing. It's the 37th state where a dinosaur has been found. #DinoParty!