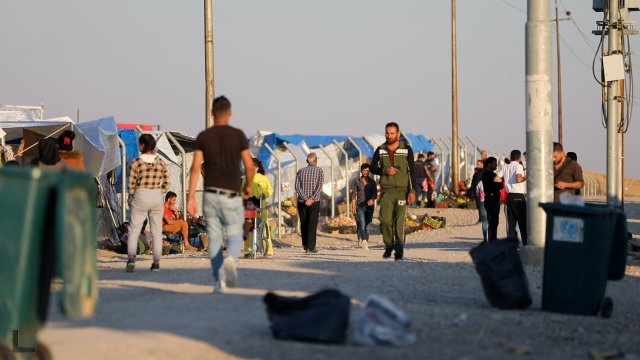 “If my face is made public, I might not be able to go back to Syria again,” said a Syrian man living in a refugee camp in Northern Iraq.

He’s one of three men all in their early 20s who spoke to Newsy. The recent chaos in Northeastern Syria has created an opening for President Bashar al-Assad to retake a part of the country that his troops haven’t held in years. For military-age men, the fear of conscription and possible punishment for dodging the draft has sent many fleeing across the border to the Kurdish region of Iraq.

In a last ditch effort to fend off Turkish troops, the Kurdish-led Syrian democratic forces requested help from the Syrian regime in October. As part of the deal, Assad’s forces and their Russian allies have moved into several towns that for the past 7 years had been self-governed by the Kurds, while Assad focused on retaking other parts of Syria that had rebelled during the civil war.

“We will face death if we return," one man said.

“The government has our names registered. We’re listed as ‘wanted persons,’” said another.

These young men point to the government’s record in former opposition areas, where military-age men were conscripted into the same army that once bombed their towns.

And those perceived as disloyal or army deserters were locked up in Assad’s notorious prisons.

“If the regime comes and takes you, you either die or stay with them.”