Syrian Refugees Give Back To Canadians Who Fled The Alberta Wildfire 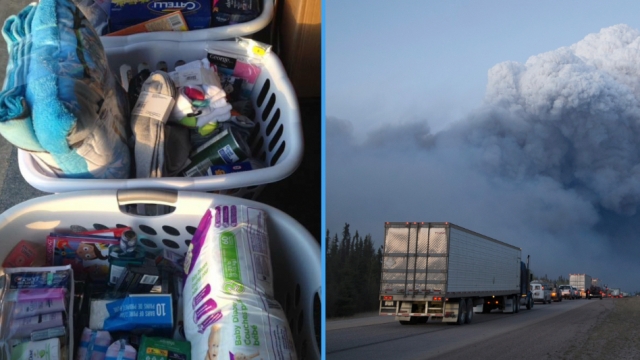 SMS
Syrian Refugees Give Back To Canadians Who Fled The Alberta Wildfire
By Melissa Prax
By Melissa Prax
May 6, 2016
Syrian refugees are helping raise money for Fort McMurray residents who were evacuated after a wildfire swept through their Alberta town.
SHOW TRANSCRIPT

Residents who fled wildfires and evacuated their Canadian town are getting help from some people who know what it means to leave their homes — Syrian refugees.

"When we came here, the Canadian people, the society, helped us a lot. So we want to say thank you. Now it's our duty; it's our turn," one of the refugees said.

All 88,000 people had to leave Fort McMurray in Alberta earlier this week because of the fire. Officials have since declared a state of emergency and as of Friday morning listed fire conditions as "extreme."

Those 88,000 people have been moved to cities up to hundreds of miles away from Fort McMurray — like Calgary.

And that's where Syrian refugees have started a donation drive through a local refugee support group.

One of the founders of the group said, "If every Syrian family even donates $5, we can pull all the money together and come buy just simply hygiene items at least."

Local media reports the group expects to raise about $500 to $1,000 to fill hampers full of toiletries.

Since last November, Calgary has taken in more than 1,400 Syrian refugees.