Syrian Refugees Are And Aren't Like Jewish WWII Refugees 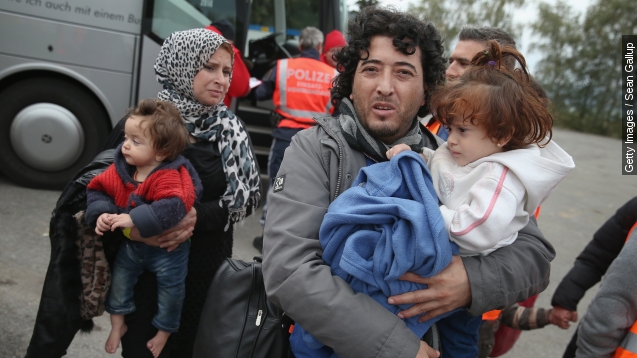 Many are in response to state governors and other politicians saying they won't accept refugees.

That comparison has some strengths but also some weaknesses.

It's true the U.S. was strict in admitting refugees from Germany and Austria before the Holocaust. The country stuck by its quota system, on the back of popular opposition to Jewish refugees. (Video via United States Holocaust Memorial Museum, National Geographic)

Radio personality Martin Goldsmith explained, "There was a certain strain of anti-Semitism in this country in 1938. ... Fifty-three percent of the American people who responded to this poll declared that 'Jews were not like the rest of us.'"

"I will not roll the dice and take the risk on allowing a few refugees simply to expose Texans to that danger," Texas Gov. Greg Abbott told the press.

While the State Department did have fears Jewish refugees could end up as operatives for Germany, Judaism wasn't associated with terrorism, and the American people's concerns were mainly economic. (Video via UCLA Film and Television Archive)

The country was in the midst of the Great Depression at the time, and Americans worried refugees would compete for jobs and burden social welfare — hence the quotas. (Video via History Channel, National Archives and Records Administration)

Still, the movement of Syrian refugees in Europe is the biggest since the second World War, so the comparisons aren't surprising. (Video via CNN)