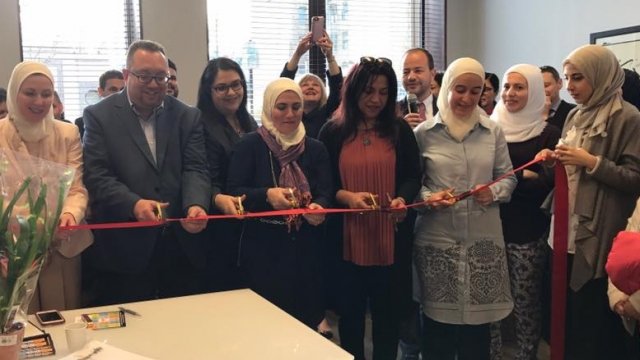 The organization leader says President Trump's efforts to drastically scale back refugee programs won't put her out of business.

Suzanne Akhras is the founder and executive director of the Syrian Community Network, a non-profit group that helps Syrian refugees assimilate into the U.S. The organization has offices in Atlanta, Chicago, Phoenix and San Diego. There, Syrian refugees can learn English, get financial help, drop off their kids for after-school programs, and most importantly, feel like part of a community.

Akhras was born in Syria to a Syrian father and a Canadian mother. They all moved to Chicago in 1982 after an uprising against the Syrian government led to violent clashes and massacres of civilians. When Akhras arrived in the U.S., she was only 10 and spoke no English.

Refugee Or Not? Countries Are Going High-tech To Figure It Out

Germany has become especially good at it.

Fast forward to 2013: When the U.S. first announced it would accept Syrian refugees, Akhras knew only too well how community-building would be key to their success.

"I did some volunteer work with other refugee groups. I saw a lot of gaps with welcoming communities, especially when the Iraqi refugees came in because the war was so unpopular. I felt really sad for the people who were coming in and had no friends. And so when I heard in 2013 that Syrian refugees will be resettled, I went on this mission to educate myself," she said.

After doing her homework on the refugee resettlement process and putting together a leadership team, she launched her organization in 2015.

"It was just as a mean to give back to the community, as a mean to welcome people who have lost everything. This is a war," Akhras explained.

A few months later, in the aftermath of the 2015 Paris attacks, Illinois Gov. Bruce Rauner temporarily banned Syrian refugees from entering the state. But that didn't go over well in Chicago, where, in reaction, the mayor organized a Thanksgiving dinner for Syrian refugees and served them food himself.

"The families were saying that, 'oh, you know, our government kills us and they cheat us and they bribe us and whatever. And here people in the city government at least are serving us food.' I feel like I fell in love with Chicago all over again," Akhras said.

With hundreds of thousands of casualties and nearly 13 million people displaced, Syria's seven-year civil war is "the biggest humanitarian emergency of our era," according to the United Nations. And that emergency is only getting worse.

The Syrian Government Has Regained Control Of Its Capital City

The Syrian government announced Monday that its military had driven what it calls "armed terrorists" out of Damascus.

"It's really hard to see the toll that it has taken on humanity, and that the international community has just kind of let it go on and on, and no one's intervening. And then seeing people drowning in the sea, you know, because they're so desperate. I think it's just too much," Akhras said.

More than 5 million displaced Syrians live in neighboring countries, such as Turkey, Lebanon and Jordan, and about 1 million have resettled in Europe. That compares with 54,000 in Canada and 33,000 in the U.S.

Akhras explained: "There's people that say, 'well, keep the refugees in Jordan, they fit culturally.' And that's true, if you have money. Jordan is a small country that has small resources. They don't give work permits. You have to work in the shadows, it means you are being taken advantage of, there's child labor. For our national security also, this is scary because now you have all these young people who are uneducated and if somebody comes in brainwashes them into a cult of some religious fanatic group, this could be a danger to all of us."

At the peak of the resettlement program in 2016, the U.S. accepted more than 15,000 Syrian refugees. That number dropped to 3,000 in 2017 and so far in 2018, only 11 Syrian refugees have entered the country. That's in line with President Donald Trump's efforts to scale back refugee programs in the name of national security.

Syria is also one of seven countries included in the U.S.' controversial travel ban. As a result, many agencies that help refugees have closed branches or cut staff sizes. But Akhras is determined to stay in business. Her organization's headquarters in Chicago helps around 180 refugee families. They have now been living in the U.S. for a couple years.

Akhras said: "As a small organization, we have the advantage of being agile and it means we can easily adapt to the changing needs of the families. So as they adjust a little bit longer, as they stay here longer, they may want to go into GED programs, certificate programs. So these are things that we have to continuously change. We don't want to stay at this level where we're only doing food stamps and quick assistance. We want to be able to uplift, give a hand up to people, and to make them advance in their jobs and in their careers so that they can feel self-fulfilled."