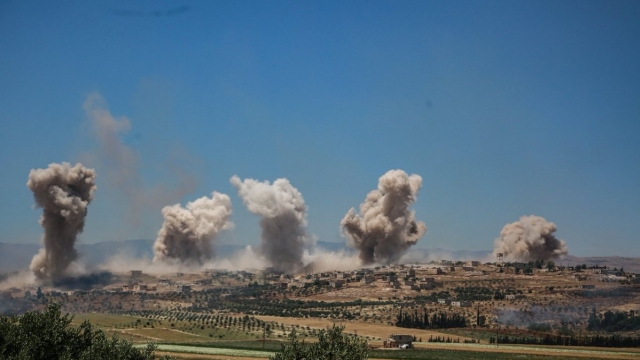 SMS
Syrian Government Airstrikes Hit Towns In Last Rebel-Held Stronghold
By Peter Hecht
By Peter Hecht
May 28, 2019
There have been numerous casualties reported and rescues underway as attacks target the northwest region near the Turkish border.
SHOW TRANSCRIPT

Rescue workers were digging for bodies and searching for survivors after government airstrikes targeted an urban district in northwest Syria.

This video footage, posted by the civilian aid group White Helmets, shows the aftermath of bombing raids on Monday. The government targeted Syria's last rebel-held stronghold, hitting the city of Ariha in the province of Idlib.

The White Helmets said the attacks killed 11 people, including six children. The Syrian Observatory for Human Rights said a total of 17 people died, including nine in Ariha and six others in a neighboring town, Hazareen.

Rescue crews said they pulled two surviving children from the rubble of destroyed buildings and rushed them to ambulances.

The United Nations estimates the Idlib province, which borders Turkey, has doubled in population to 3 million as a result of people fleeing the war elsewhere in Syria.

The UN says a large-scale attack on the region by government forces - aided by Russia and Iraq - could signal the culminating battle in Syria's eight-year civil war that has killed an estimated 400,000 people.

More than 5 million people have left the country, and the UN says the potential strike could send another 800,000 people fleeing for safety.