Syria Truce Halts Fighting, But Not Where It's Needed Most 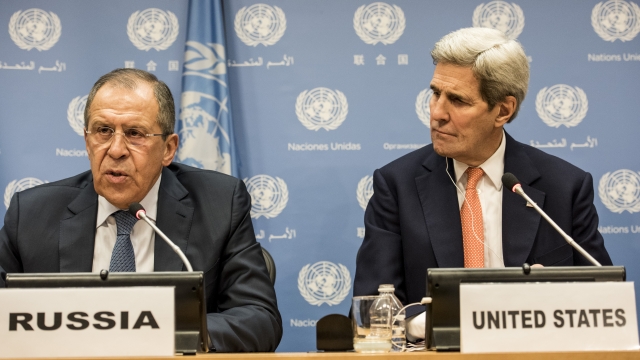 SMS
Syria Truce Halts Fighting, But Not Where It's Needed Most
By Bell Johnson
By Bell Johnson
April 30, 2016
U.S. and Russia helped broker a partial truce in two regions of Syria, hoping it renews peace talks, despite the escalating violence in Aleppo.
SHOW TRANSCRIPT

A partial truce has been announced in several regions of Syria, but fighting continues to escalate in Aleppo in the country's northwest.

The Syrian army released a statement calling the agreement a "regime of calm." The truce is scheduled to last for a day in a suburb of Damascus and for three days in Latakia, also in the country's northwest region.

As violence halts in other places, Aleppo is an exception. The Syrian Observatory for Human Rights reports 44 people have been killed in the region over a two-day period this week.

The U.N. said the escalation of violence in Aleppo revealed a "monstrous disregard for civilian lives." Medical clinics and marketplaces in the region are increasingly being targeted by all sides, which the U.N. says would "amount to war crimes."

The White House said Friday it was in contact with Russia to help broker a deal in Damascus and Latakia, hoping that would it would create "a catalyzing effect" in inspiring a return to the cease-fire.

White House press secretary Josh Earnest said, "By refreshing this agreement and focusing our attention on these two particular areas, we can build momentum again toward a broadly observed cessation of hostitlies."