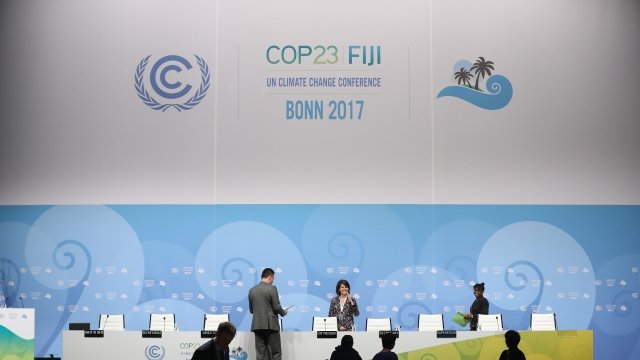 SMS
The US Is Now The Only Country Not On Board With The Paris Accord
By Lindsey Pulse
By Lindsey Pulse
November 7, 2017
Syria announced at United Nations climate talks that it plans to join the agreement.
SHOW TRANSCRIPT

Syria is signing on to the Paris climate agreement — which means the U.S. is now the only country not on board.

Outlets report Syria made the announcement at United Nations climate talks on Tuesday.

Initially, Nicaragua said it wouldn't sign because it didn't think the pact went far enough to combat climate change. Then, Nicaraguan President Daniel Ortega said in September the country would sign in solidarity with those most vulnerable to the effects of natural disasters.

Outlets report Syria didn't take part in the initial climate talks due in large part to sanctions imposed on the Syrian government. 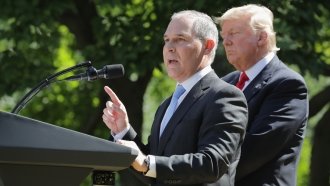 In June, President Donald Trump said the U.S. would withdraw from the agreement. He claimed among other things the accord was "negotiated badly" and that it undermines U.S. competitiveness.

The agreement says no country can officially leave until 2020, and members aren't even supposed to announce plans to withdraw until November 2019.

A U.S. diplomat at the climate talks reportedly said the country's position hasn't changed, but the U.S. will continue participating in climate change discussions.