Syria's Kurds Want To Partition Themselves 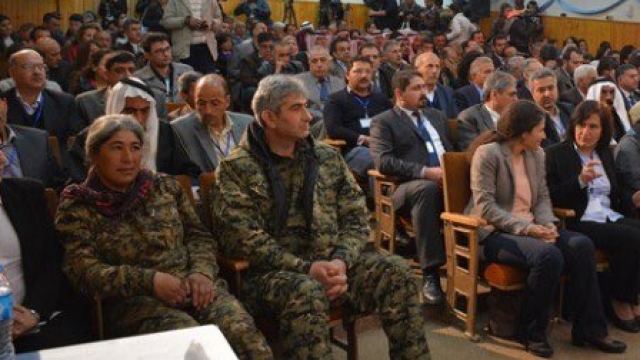 SMS
Syria's Kurds Want To Partition Themselves
By Matt Picht
By Matt Picht
March 16, 2016
Kurdish groups have drawn up a plan for their own federal autonomous region within Syria, but the country's neighbors aren't on board.
SHOW TRANSCRIPT

Kurdish groups want their own autonomous region in Syria. A lot of other groups in the area have a problem with that.

Officials from the Kurdish Democratic Union Party, or PYD, announced they're planning to consolidate the Kurdish-held territory in northern Syria into a single federal region. The new region would take some power from the central government, but it's not clear which powers would stay and which would go.

The PYD presents its plan as a potential road map for federalizing Syria, an idea which has been kicked around by U.S., Russian and U.N. officials in the past. Breaking up Syria into a group of semiautonomous regions could help resolve the conflicts which have ravaged Syria for the past five years.

This announcement comes against the backdrop of the ongoing peace talks in Geneva aimed at resolving the Syrian conflict. Kurdish groups were excluded from those talks in order to avoid angering Turkey.

And that's one big problem right there: There are many countries in the region that aren't particularly thrilled about the prospect of an autonomous Kurdish region. Turkey's government doesn't want to embolden Kurdish separatists in the country any further; a lethal car bombing in Ankara has been attributed to Kurdish terrorists.

What's more, the idea of partitioning Syria into a collection of federalized states has been met with vehement opposition from both sides of the civil war. Dividing up the war-torn country is sure to be a complicated and messy process that risks deepening the country's sectarian divisions.

This video includes clips from U.N. High Commissioner for Refugees and CNN.