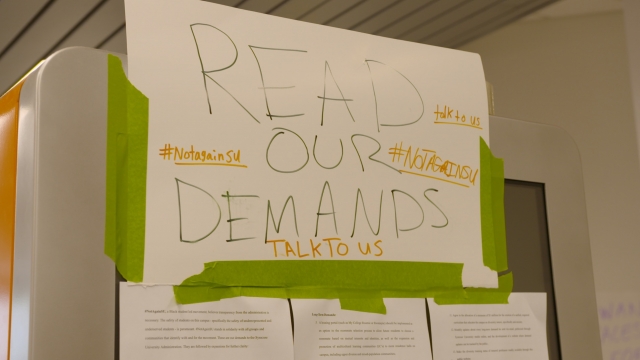 For eight days, Syracuse University students occupied a student wellness center in protest of what they say is a history of racism on campus. The #NotAgainSU movement followed a series of racist incidents that occurred earlier this month, and it launched a greater discussion about campus safety and diversity.

On Thursday night, organizers announced they were leaving the wellness center, but that their mission to hold university officials accountable isn't over.

According to the school's student-run newspaper, The Daily Orange, more than a dozen racist or bias-related events have been reported to investigators since Nov. 7. Some students have reportedly left early for the Thanksgiving holiday due to safety concerns.

Protest leaders thanked students for their support and said even though the sit-in is over, they're still calling for the resignation of Syracuse University Chancellor Kent Syverud and other officials. Organizers had given Syverud 19 demands they said would make campus safer and more inclusive.

In a statement posted to #NotAgainSU's Instagram page, campaign leaders said Syverud's administration made "severe mistakes, not only over the past two weeks but the past five years." Although Syverud outright agreed to 16 of their 19 demands, organizers said he "signed onto an edited version" of them that they had not agreed to.

Earlier on Thursday, Syverud said the protesters had "behaved with pretty amazing restraint" under "stressful circumstances."

He said: "I am very reflective in the last 24 hours on the fact that in the midst of all the bigotry we have seen, some amazing people — faculty, students and staff — have come together in good faith for a university they do care about and want to be better, and I think it will produce a more inclusive community."

Syracuse University Dean of Students Marianne Huger Thomson said she thought the students' demands "were not necessarily tied" to the reported racist incidents but "went much deeper." She said Syracuse "is not immune" to the hate in the world.

But as many Syracuse students and alumni said during the protest, bigotry on campus isn't new. Yusuf Abdul-Qadir is a longtime Syracuse resident, alumnus and the director of the Central New York chapter of the ACLU. He said he corresponded with organizers and recalled his own experience as a student activist against racism.

Abdul-Qadir said: "With each successive generation of students that have come to Syracuse, students of color have found that there's been a climate and a culture of bias at the university that hasn't been confronted adequately, at times, from the university. And many times, they've felt that the university hasn't been doing what is appropriate by way of informing students when these bias-related incidents occur."

Abdul-Qadir said there's a general challenge in understanding the gravity and impact of racism. He said the administration should keep open lines of communication with students in its attempt to respond to their concerns.

He said: "From going in the classroom, to the dormitory, to interactions with faculty and staff, to being in the broader community and your encounters with police and what you see on a regular, daily basis with respect to the ways with which black and brown people have been treated historically and continue to be treated in this country."