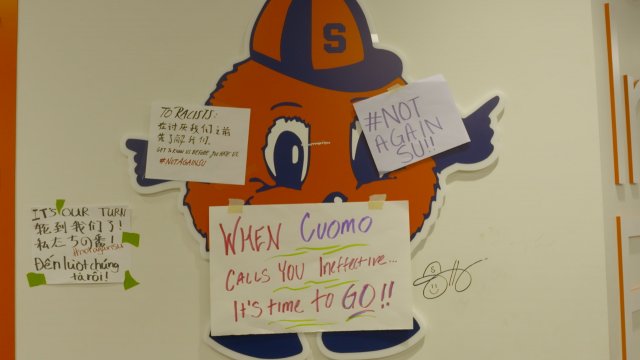 Syracuse University students are working to support each other following a series of racist incidents on campus. And those incidents have sparked a larger conversation about on-campus safety and representation.

The first event happened earlier this month, when bathrooms in a residence hall were vandalized with racial slurs and graffiti that targeted black and Asian students. Racist graffiti and swastikas were found in the snow and in other residence halls in the following days.

One woman's report that she was verbally harassed and called a racial slur by a group of people has led the school to suspend a fraternity. The evidence investigators have collected in connection with the woman's account reportedly includes video footage.

There have also been reports that the white supremacist manifesto written by the suspect in the Christchurch mosque shooting was sent to students using Apple's AirDrop feature. University officials have said that was "probably a hoax," but some students say they have screenshots proving it did happen.

In total, at least 12 racist or bias-related incidents were reported to investigators. The events spurred student-led protests and the hashtag #NotAgainSU, which calls for accountability from university and public safety officials. Students have staged a sit-in at a campus wellness facility since last week — an effort supported by donations from the community.

Syracuse's independent student newspaper, The Daily Orange, reports some students have skipped classes or left early for the Thanksgiving holiday due to safety concerns.

Organizers presented university officials with a list of 19 demands they say will improve diversity, safety and transparency on campus. They called on Syracuse University Chancellor Kent Syverud to either agree to the terms or resign.

On Thursday morning, he announced he had agreed outright to 16 of the demands and wanted to make "minor revisions" to the remaining three. But according to the #NotAgainSU Instagram page, which has shared news and information about the movement, organizers are still calling for his resignation.