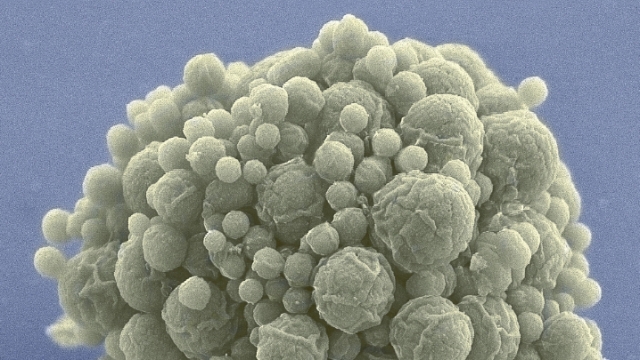 SMS
Synthetic Life Has Been Streamlined And Is Ready To Be Put To Work
By Steven Sparkman
By Steven Sparkman
March 24, 2016
A new study pinpoints the fewest genes needed for a bacteria to thrive, and we don't know what a third of them do.
SHOW TRANSCRIPT

In 2010, researchers at the J. Craig Venter Institute announced they'd created a bacteria that runs entirely on lab-made DNA — the world's first synthetic life-form. More than five years later later, they've streamlined, stripped down and organized that life-form, and are ready to turn it into a tiny factory.

The team's 2010 announcement made headlines around the world.

"This is the first self-replicating species that we've had on the planet whose parent is a computer," Venter said.

But creating a life-form entirely programmed by humans was also seen as kind of scary.

"This has enormous promise and enormous peril," said Paul Wolpe of the Emory Center for Ethics.

"This story reminds me of 'Jurassic Park,' when all the dinosaurs got out and ran amok," Fox News's Jenna Lee said.

But the process of making DNA in a lab has only gotten easier since then. Some of those same researchers now sell DNA-printing machines.

The plan, though, has always been to strip down a genome to its bare essentials, cutting out every piece of unnecessary DNA. That would serve two goals: helping scientists learn more about how life works and taking the first steps to build custom bacteria.

On the first point, it turns out we don't know life nearly as well as we thought. A viable life-form needs at least 473 genes. That's way higher than scientists predicted, and they still aren't sure what a third of those genes do.

The team says even if this research only shows us how little we know, it would still be worth it. But they don't intend to stop there. They want to put this streamlined life-form to work.

Bacteria are great at taking one compound and turning it into another. They're little chemistry labs, and many scientists believe using carefully built bacteria can solve a lot of the world's problems.

Bacteria can turn switch grass into biofuel as easily as brewing beer. They create all kinds of medicines and can even generate electricity.

But a stripped-down life-form can do all of that with a lot of advantages: You can make sure none of your ingredients go to waste, control mutations and, most importantly, design the genome from scratch to do exactly what you want.

The researchers also said their stripped-down bacteria can give scientists clues to the origins of life. It apparently behaves how scientists think some of the world's first life-forms did.