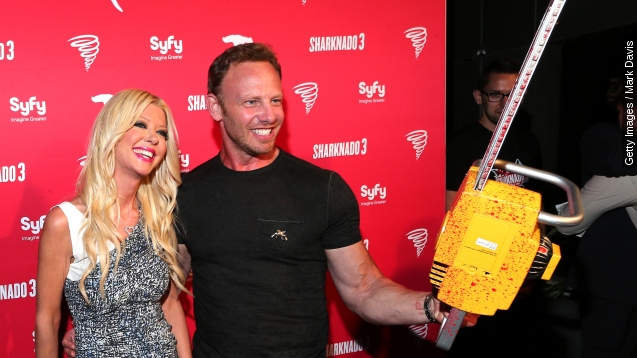 SMS
SyFy Puts Fate Of Tara Reid's 'Sharknado' Run In Fans' Hands
By Ben Lawson
By Ben Lawson
July 23, 2015
How do you take a movie about a shark tornado to new heights? Asking fans to vote on a character's fate is a good start.
SHOW TRANSCRIPT

I mean, at this point are you really surprised? Syfy's "Sharknado" franchise is, indeed, getting a fourth movie.

The news came during the premiere of "Sharknado 3: Oh Hell No!" The movie ended with Tara Reid's character's life in jeopardy as wreckage from a space shuttle hurtled toward her.

Now Syfy is letting fans decide if Reid's character, April, lives or dies by voting either through tweeting with the appropriate hashtag or going to their website.

But you know as cheesy as the move seems, it's actually kind of smart. The first "Sharknado" got more attention than Syfy execs likely ever dreamed it would. That's thanks to people tweeting about just how ridiculous it was.

And when you're going into your fourth installment of a made-for-TV movie, you have to do something to keep fans engaged.

DC Comics actually let Batman fans do the same thing with the fate of the second Robin in the late '80s. They killed him.

There's no word yet on when voting closes. Just remember, a vote for April to die is a vote for Tara Reid to be fired.