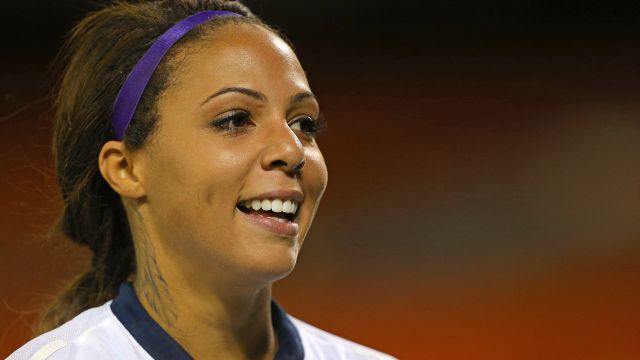 SMS
Sydney Leroux Announces Pregnancy, Adds To USWNT Olympic Uncertainties
By Matt Moreno
By Matt Moreno
January 26, 2016
Sydney Leroux's absence adds to the growing list of players on the U.S. Women's National Team who won't be on the field for the 2016 Olympics.
SHOW TRANSCRIPT

It looks like plans are changing for another key piece of the 2016 US Women's Olympic soccer team.

Forward Sydney Leroux announced on Instagram that she's pregnant and will likely be missing the US' Olympic stint in Rio de Janiero.

Leroux, a member of FC Kansas City, is married to Sporting Kansas City's Dom Dwyer who made a similar announcement on his Instagram.

Leroux's absence will mean the US' World Cup and gold medal-winning offense will need to adjust if they want to make another deep run.

The team is already without forward Abby Wambach, the all-time leading scorer in women's soccer. Wambach retired after the team's World Cup performance in 2015. (Video via Gatorade)

Midfielders Lauren Holiday and Shannon Boxx and defender Lori Chalupny have also retired prior to the Olympics.

Forward Amy Rodriguez is likely a no-go for the games. She announced her second pregnancy in late December and remains questionable for the 2016 games. (Video via U.S. Soccer)

Midfielder Megan Rapinoe is a question mark for team. She tore her ACL in December but is working to return to the Olympics, which start Aug. 5. (Video via Fox Sports)

As NBC Sports points out, if Rapinoe and Rodriguez are unavailable, Alex Morgan will be the only returning forward from the 2012 Olympic team.

Leroux started two games for the U.S. during their World Cup run in 2015. She had one goal in four games played in the 2012 Olympics. (Video via Nike)